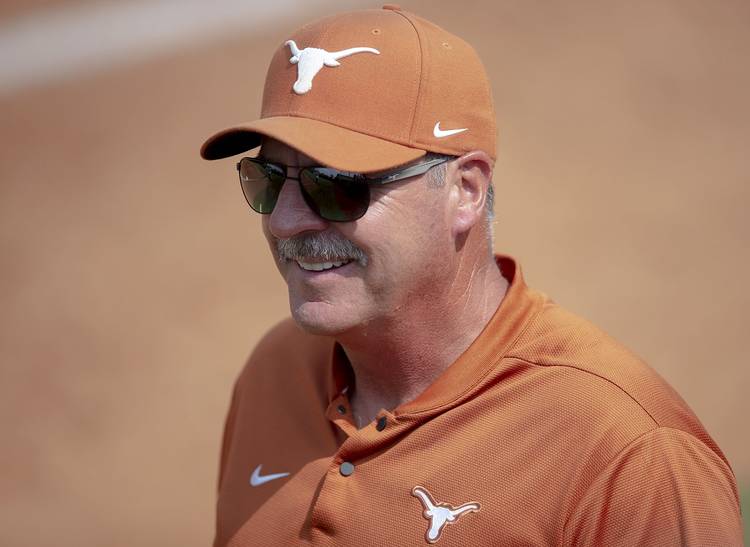 Texas head coach Mike White is 70-20 in his two seasons with the Longhorns. [NICK WAGNER/AMERICAN-STATESMAN]

In a Twitter post that was published on Wednesday night, Molly Jacobsen announced that she will join Texas’ softball team.

A left-handed pitcher, Jacobsen spent the past two seasons at Ole Miss. Jacobsen was a senior this year, but a recent NCAA ruling has allowed spring-sport athletes to restart the campaigns that were cancelled by the coronavirus pandemic.

Can’t wait to be a longhorn!! 🤘🏼🧡 pic.twitter.com/vUWkPATWMU

Jacobsen went 5-6 with a 3.42 ERA and 64 strikeouts during this abbreviated spring. As a junior, Jacobsen was an All-SEC honoree whose 26- and 23-inning scoreless streaks were the second- and third-best runs in school history. Jacobsen started her collegiate career at Des Moines Area Community College and was the NJCAA Division II Pitcher of the Year in 2018.

Texas coach Mike White didn’t need to dig up much film on Jacobsen during her recruitment. Over the past two seasons, Texas has faced Ole Miss three times. Jacobsen pitched in all three of those games.

In those 12 2/3 innings against Texas, Jacobsen surrendered six earned runs. In one of last year’s two meetings, she held Texas scoreless until the sixth inning of UT’s 3-2 win in Austin. Texas beat Ole Miss in Mexico this year, but Jacobsen only allowed two earned runs and eight hits over her seven innings of work.

Texas (24-3) ranked 18th among the NCAA’s 295 Division I teams in ERA this past season. Jacobsen’s transfer will only add to the abundance of available arms on the Texas roster next spring.

Like Jacobsen, All-American Miranda Elish will re-do her senior year in 2021. Sophomore Shealyn O’Leary led the NCAA in ERA in 2019, and freshman Courtney Day had a strong debut this season. New Jersey right-hander Ryleigh White was a prized piece of UT’s 2020 recruiting class. Junior Ariana Adams and freshman Grace Green are two additional options in the pitching circle.