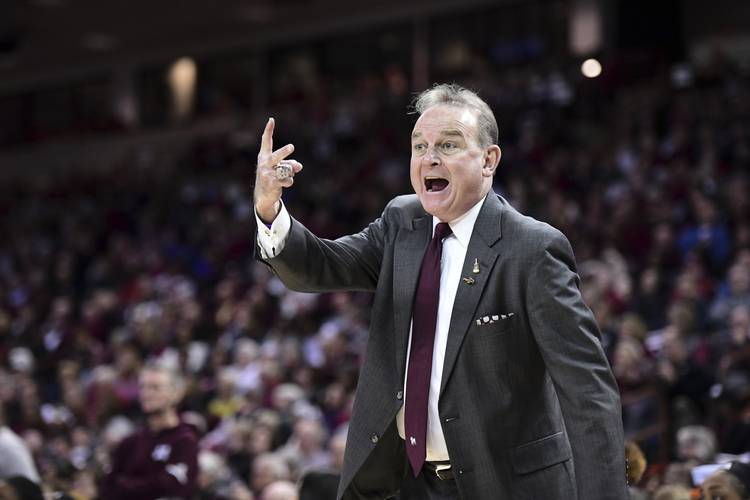 Mississippi State coach Vic Schaefer shouts at an official during the first half of a game against South Carolina on Jan. 20, 2020, in Columbia, S.C. (AP Photo/Sean Rayford)

When tasked with filling out his staff at Texas, new women’s basketball coach Vic Schaefer went with what he knew.

Texas announced on Friday that Johnnie Harris, Dionnah Jackson-Durrett and Elena Lovato have been hired as Schaefer’s assistant coaches. All three women worked with Schaefer at Mississippi State. Earlier this month, Texas picked Schaefer to replace Karen Aston as the Longhorns’ leader.

At Texas, Harris and Jackson-Durrett will retain their titles as associate head coaches. Lovato will also serve as the program’s recruiting coordinator.

“The first thing that comes to mind is that this is the A-Team,” Schaefer said in a statement. “They’re the best in the business. We’re family. We’ve done so much together and had so much success together. They’re not only great coaches, but great role models and mentors for our young players. They’re not only going to represent The University of Texas in the best way possible, but they’re going to be great in our community. For me, as I’ve always said, I’m smart enough to know that I can’t do it by myself. This is a tremendous staff and we’re very lucky to have them all here.”

Harris coached alongside Schaefer during each of his eight seasons as Mississippi State’s head coach. She was named the WBCA assistant coach of the year in 2018. Harris, who was reportedly considered for the Mississippi State vacancy, has also worked at Texas A&M, Arkansas and North Carolina State.

Over its past four seasons, Mississippi State compiled a 131-16 record and was the NCAA’s runner-up in 2017 and 2018. The 2019-20 season was cut short by the coronavirus campaign, but the Bulldogs finished as the No. 9 team in the Associated Press’ poll.