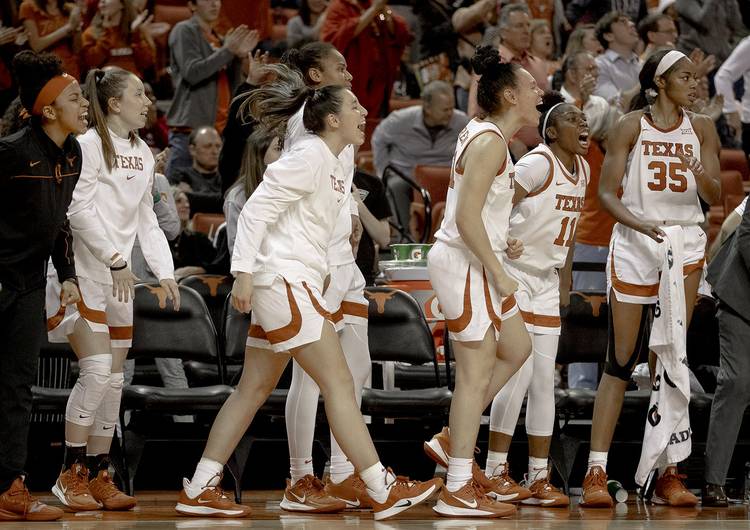 Texas players celebrate a 3-pointer against TCU on Jan. 3, 2020, in Austin. [NICK WAGNER/AMERICAN-STATESMAN]

On Thursday evening, Deyona Gaston announced that she will “be staying in Texas a little bit longer.”

Gaston took to Twitter to reveal that she will play basketball at Texas. A 6-2 forward from Pearland High, Gaston originally signed with Mississippi State in November. Former Mississippi State coach Vic Schaefer took over at Texas earlier this month, and Gaston has decided to follow him to Austin.

A UT source confirmed to the American-Statesman that Mississippi State has released Gaston from her letter of intent. She will be eligible to play this upcoming season.

As a freshman in high school, Gaston was the top-ranked prospect in the 2020 recruiting class. Injuries, however, cost Gaston her sophomore season and part of her junior year. She is currently rated by ESPN HoopGurlz as the No. 90 recruit and the No. 20 forward.

“She’s had a few little nicks and injuries the last couple of years, but I think she is back,” Schaefer said when Mississippi State signed Gaston. “She is going to be everything that we thought she was going to be as a freshman. I can remember watching and following her for a long, long time.”

Gaston will join UT’s 2020 recruiting class. Guards Ashley Chevalier and Shay Holle, who are ESPN’s No. 86 and 97 recruits, were among the five players that UT signed in the fall. One of those signees, Harvard graduate transfer Katie Benzan, opted this week to join the basketball team at Maryland.

Texas is set to return seven players from a team that went 19-11 during the 2019-20 season. Factoring in the incoming freshmen and transfers, Texas should have one scholarship that remains open.