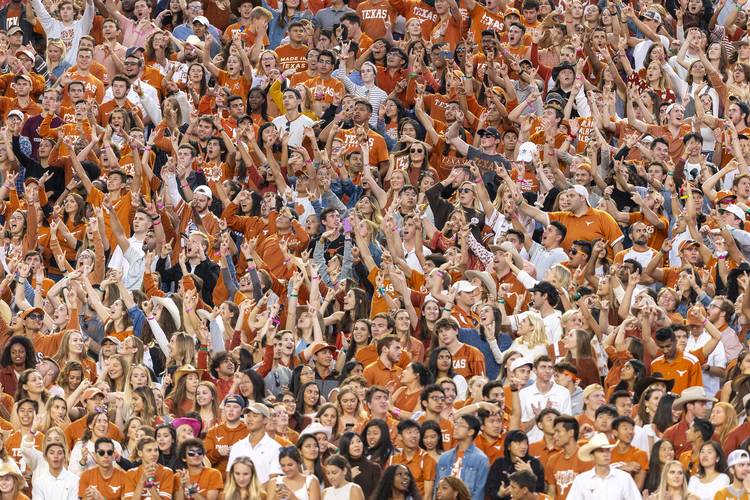 Texas fans cheer in the second half of an NCAA college football game at Royal-Memorial Stadium, Saturday, Nov., 9, 2019. [Stephen Spillman for Statesman]

Even with no games and no students on campus, Texas found a way to win on the internet.

The athletic department’s wide-ranging #MyTexas campaign generated an eye-popping 66.2 million impressions across all of UT’s social media platforms, according to an internal report.

The majority of impressions and interactions came via Twitter. The school measured more than 50 million impressions on Friday alone, the day of the My Texas Tailgate on social media.

Baseball coach David Pierce was the star of a creative short video from his house. Pierce wore his full game uniform and had a full day while sheltering in place. Others were just as creative, and the department posted a lengthy video from behind-the-scenes staffers talking about “what Texas means to me.”

Drew Martin, director of external operations, said the entire idea was to engage the UT fan base during a time of social distancing. The department’s social media team “adopted a mentality that our only limitation would be our imaginations,” he said.

“I am so incredibly proud of the entire external affairs staff for accomplishing the herculean feat of My Texas tailgate,” Martin said. “The sheer volume of content alone was impressive, but to see how our fans reacted to it, embraced it and shared their own My Texas stories was truly something special.”

In the school’s report, more than five hours and 40 minutes of video was created for the #MyTexas campaign. More than 170 cellphone videos were submitted by athletic department employees. The department created more than 400 wallpaper graphics. All in, the Horns picked up more than 4,200 new followers to their channels.

Social media is the new frontier in the athletic department arms race. It should become even more important going forward in a digitized society.