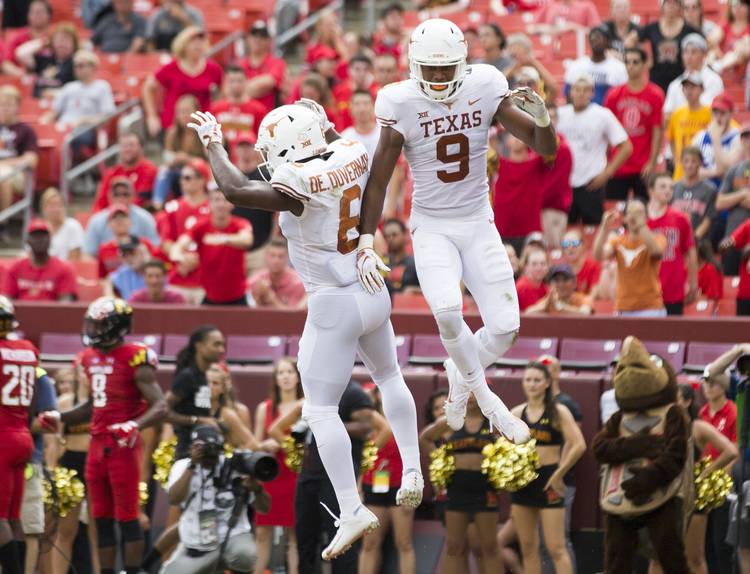 Texas receivers Collin Johnson (9) and Devin Duvernay celebrate a touchdown against Maryland at FedExField, in Landover, Md., on Sept. 1, 2018. RICARDO B. BRAZZIELL / AMERICAN-STATESMAN

When it comes to jersey numbers, some former Longhorns will have a new look during the 2020 football season.

Former Texas starters Brandon Jones, Devin Duvernay and Collin Johnson were recently assigned the jersey numbers that they will wear during their first NFL seasons. Jones, Duvernay and Johnson were all selected in last month’s draft. For all three of those Texas Exes, a new home means a new number.

Johnson announced last month that the Jaguars have assigned him the No. 19. Jacksonville used a fifth-round pick on Johnson. While wearing No. 9 at Texas, Johnson caught 188 footballs and became the sixth-leading receiver in school history.

Did someone ask for jersey numbers? 😏 pic.twitter.com/TEmMjh7T5h

Jones donned Johnson’s new number at Texas, but he will shift to the No. 45 in Miami’s secondary. A third-round choice and the 70th-overall pick, Jones was the first Longhorn selected in the draft. He started for three seasons at UT.

Duvernay will hope that the No. 13 is anything but unlucky. Baltimore secured Duvernay’s services in the third round of the draft. As a senior who wore the No. 6 jersey, Duvernay led the UT offense with his 1,386 receiving yards and nine touchdown catches. His 106 receptions ranked third nationally behind the 111 footballs hauled in by LSU’s Justin Jefferson and SMU’s James Proche, who Baltimore’s sixth-round pick.

Through the undrafted free agency process, Texas also added the names of Zach Shackelford and Malcolm Roach to the incoming class of rookies. Shackelford, an offensive lineman, will wear No. 59 in Tampa Bay. New Orleans has given its No. 76 jersey to Roach, who is attempting to earn playing time on the Saints’ defensive line.