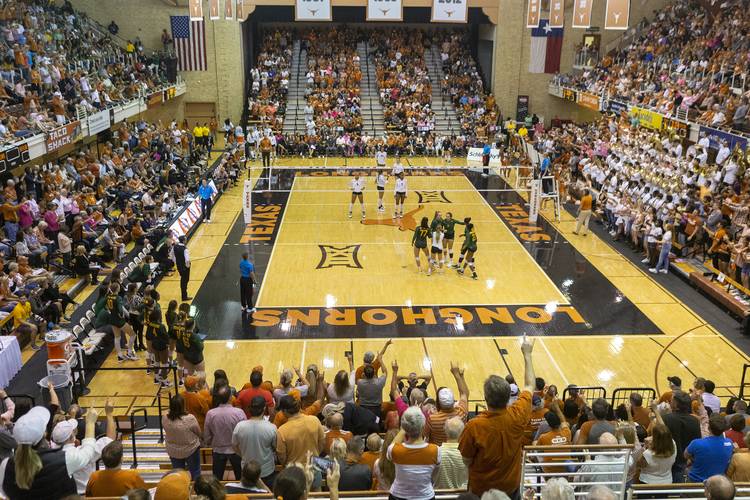 Texas competes against Baylor in front of a sold-out at Gregory Gym on Oct. 23, 2019. [Stephen Spillman for Statesman]

Who Texas will play this volleyball season has yet to be announced.

When Texas will play hasn’t been decided either.

As for where Texas will play, the Longhorns provided an answer on Monday.

With the coronavirus pandemic and social distancing still major concerns, Texas said in a press release that the relocation will “provide adequate space for social distancing for teams, fans and working event staff.” The Erwin Center has a capacity of 16,540. Gregory Gym considers 4,000 fans to be a sellout.

Last year, Texas ranked fifth in the NCAA with an average draw of 3,873 fans. Those sizable crowds and Gregory Gym’s comfy confines have given UT a homecourt advantage in recent years. In fact, Texas is 74-5 in home matches over its past five seasons. Fourteen of those wins were recorded in the NCAA Tournament.

“That gym is loud,” Baylor middle blocker Shelley Stafford said in 2019. “There’s shirtless guys about five feet on the left and there’s fans screaming on the right. You hear just all sorts of fun stuff being yelled at you.”

The Erwin Center is also the home of UT’s basketball teams. The sight of Texas playing volleyball in a basketball arena won’t be too odd for the program’s devout fans. Baylor, Iowa State, Texas Tech and West Virginia all set up shop in their schools’ basketball gyms last season. A five-set match between Texas and Baylor at the Ferrell Center in Waco this past November drew 7,357 spectators.