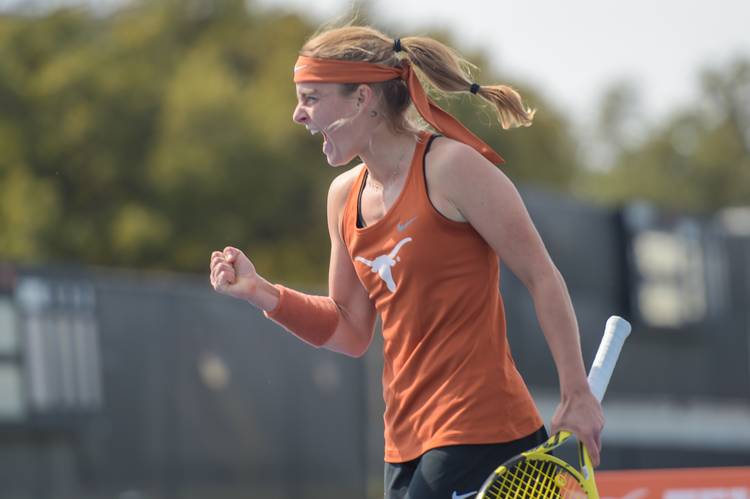 An All-American in 2020, Anna Turati is 94-16 in singles play over her four years at Texas. She will return to Texas for another year of tennis. (Photo courtesy of Texas Athletics).

Two months after her sister turned pro, Anna Turati has decided that she is not done playing tennis at Texas.

Turati announced on Thursday that she will return to Austin for a fifth year on Texas’ tennis team. In a video that was posted on her team’s Twitter account, Turati said “I couldn’t accept the fact that the coronavirus took away my last season as a Longhorn, so I want to end my college career on my own terms.”

Turati was classified as a senior during the 2019-20 school year. However, spring sports across the nation were cancelled in March due to the coronavirus pandemic.

The NCAA later ruled that the athletes participating in spring sports could receive an extra year of eligibility. But Turati’s twin, Bianca, decided in May that she would not return to UT. Christian Sigsgaard and Yuya Ito, who were seniors on the men’s tennis team at Texas, also opted for professional careers.

Turati, though, will take the NCAA up on its offer. According to Texas, she is on pace to earn a degree in exercise science by next year.

“I know this is the right decision for me, as I can continue to develop and train at a high level with such an amazing staff and team,” Turati said in a statement. “I also will be able to complete my degree at one of the top academic universities in the world. I’m sure that this experience here at UT is preparing me best for my future, both on and off the court. I’m very excited to get back on the court and fight for Texas, wearing burnt orange. Hook ‘em!”

Read more: Worry is never very far from the minds these days of Texas’ Turati twins

Recruited out of Italy, Turati has compiled a singles record of 94-16 over her four years at Texas. She is 52-29 in doubles play. In 2020, Turati earned ITA All-American honors. Three of the opponents that she beat last fall were ranked second, fifth and seventh by the ITA.