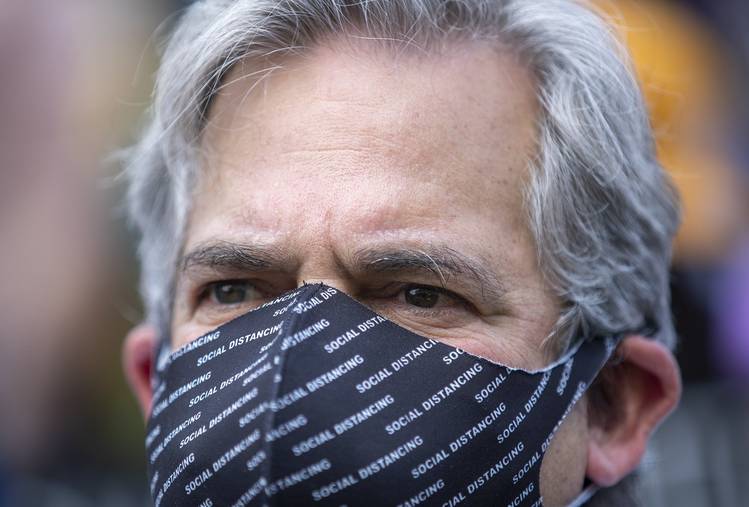 Austin City Mayor Steve Adler was among thousands of protesters as they gathered and marched peacefully from Huston-Tillotson University to the State Capitol chanting Black Lives Matter and justice on Sunday, June 7, 2020.[RICARDO B. BRAZZIELL/AMERICAN-STATESMAN]

Austin Mayor Steve Adler pulled no punches Wednesday during his annual State of the City address about the University of Texas’ plan to allow fans into Royal-Memorial Stadium this fall.

“I hope they don’t really try to do this,” Adler said. “I’m not sure there’s anywhere in the world that’s having gatherings that size at this point.”

City officials nationwide have made it clear they believe having any large gatherings would be dangerous and lead to super-spreader events of COVID-19. Austin officials have been especially candid, practically imploring UT to have no fans at all.

City mandates have no bearing on UT’s decision-making process. The school is only required to follow state guidelines.

Gov. Greg Abbott’s current mandate is for a 50% stadium capacity in all pro and college stadiums. Texas officials were set to go with 50%, but the UT System Board of Regents asked the school look at a 25% capacity. That would be about 24,000 fans.

Texas athletics has not made it official that 25% capacity will be the final figure. But both school president Jay Hartzell and athletic director Chris Del Conte have walked right up to the line in their public comments.

“We know that this is a source of concern for people in the community,” Hartzell said Tuesday. “How is this going to work and is it going to be safe, not only for our student-athletes, but also, are we going to have an impact on, for example, the city of Austin if this doesn’t go well.

“So we’re taking it very seriously, and I know that Chris Del Conte and the entire athletics team is putting a lot of concern and care into it.”