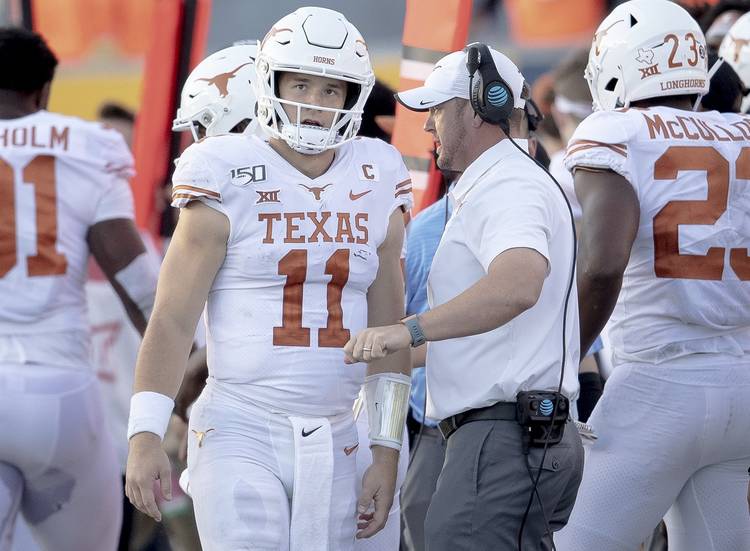 Both Ehlinger and Sterns spoke to Big 12 commissioner Bob Bowlsby during the run-up to Wednesday’s announcement. Bowlsby said he interviewed at least two athletes at all 10 schools, and the overwhelming theme was that athletes wanted to play.

“I had been very hopeful that the Big 12 would come to this decision,” Herman said in a statement. “(Athletic director) Chris Del Conte has been awesome, he kept me informed throughout the entire process so it didn’t come as a surprise. Our guys are really excited.

“We understand all of the health and safety challenges and appreciate everything our medical team is doing here, but probably the worst thing about all of this has been the uncertainty,” Herman continued. “It has been very hard on our players mentally, and they’ve done a great job fighting through it.

“When the conference comes out and says, ‘We’re committed to finding every way possible that we can play this season,’ I think that gives them a lot of pride, and it gives them a lot of confidence that, if they come out here and do what they’re supposed to do, they’re going to get to play this great game that they love.”

Ehlinger said he was “very happy that the Big 12 is following the medical advice that has been presented to them.”

“We’re grateful for the opportunity to continue to practice and develop, and we hope that they continue to listen to our medical professionals and the guidance that they’re given,” Ehlinger said. “It’s been incredible to be involved in the process. I know we’re all extremely grateful that the Big 12 has included a group of players representing every school to give their input and feedback and also allow us to hear what’s going into the decision-making process.”

Sterns said it was “great” that the league is continuing fall sports right now.

“Obviously, we as players want to play as long as it’s safe for us,” Sterns said. “It’s been good that the Big 12 has allowed us to be involved in the process, because there is obviously a lot of uncertainty. And for us to get some sort of an answer, that helps ease our minds.

“We want to play, so to have that schedule, and to see the structure of what it’s going to look like, is relieving for us as players,” Sterns added. “And, that allows Sam and I to have the opportunity to share all of that information with our entire team.”