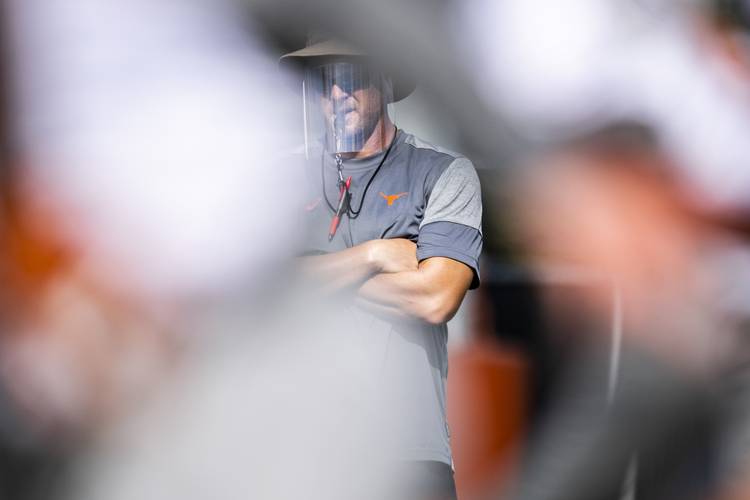 Texas coach Tom Herman wore a face shield during practice Friday during the first day of practice for the season on Friday, Aug. 7, 2020. Photo courtesy of Texas Athletics

Texas continues to work the grad transfer market and expects to add a Pac-12 castoff in receiver Brenden Schooler, a source familiar with the situation told the American-Statesman.

Schooler spent most of his career at Oregon, piling up 43 catches for 521 yards and four touchdowns from 2016-19. He transferred to Arizona for the 2020 season but the league canceled football over coronavirus fears.

Horns247 first reported the transfer, although it’s still unclear when Schooler will join the team and whether he’ll play in the season opener against UTEP. Graduate transfers are eligible immediately.

UT finished fourth in the Big 12 in passing offense last season but lost standout receiver Devin Duvernay to the NFL draft. Duvernay led the Big 12 with 1,386 passing yards and had nine touchdown catches.

Earlier this month, Texas coach Tom Herman said the school had not been contacted by anyone from the Pac-12 or Big Ten. However, that was merely days after those leagues canceled football this fall. At that time, the Horns had “82 or 83” players on scholarship, Herman said. The maximum allowed is 85.

The Horns are also expected to sign Sioux Falls running back Gabriel Watson as a grad transfer. The school has not formally completed his paperwork, though.