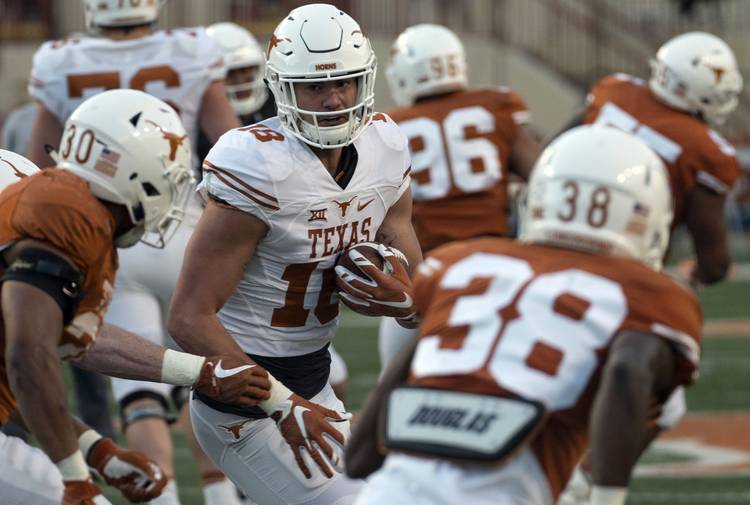 Wiley’s appearance among the tight ends is expected. Wiley played that position as a true freshman, and he will battle senior Cade Brewer, redshirt freshman Brayden Liebrock and converted receiver Malcolm Epps for playing time in 2020. Wiley started twice and made a 15-yard catch last season.

Longhorn fans, though, may be a little surprised to learn that Wiley is also currently serving as UT’s backup kicker.

Advertisement
Tom Herman briefly mentioned Wiley’s standing among his kickers during a media availability on Sunday. Texas has an established starter in junior Cameron Dicker, who boasts a 57-yard field goal and a game-winner against Oklahoma on his resume. But if something were to happen to Dicker the Kicker, Texas would apparently turn to Wiley instead of the walk-on legs belonging to Zach Lindner, Erwin Von Nacher and Logan Smith.

Not a knock on J-Dub or UT kicking in the least. That dude has a cannon for a leg!!!#Athlete https://t.co/fXg82yiDnj

Don’t let Wiley’s 6-7, 254-pound frame fool you. During his senior year at Temple High, Wiley was 34-for-38 on extra-point attempts. He also didn’t miss a field goal. The longest of Wiley’s five field goals was from 32 yards out.

Once rated as a three-star recruit, Wiley earned all-district honors at three different positions in high school. He was lauded as District 18-5A’s top punter in 2016. The following year, he was an all-district tight end. After he took over as Temple’s quarterback during his senior year, Wiley split District 12-6A’s Offensive MVP award.

‘This is more of a see you later’: Texas assistant Jai Lucas leaves Longhorns for Kentucky