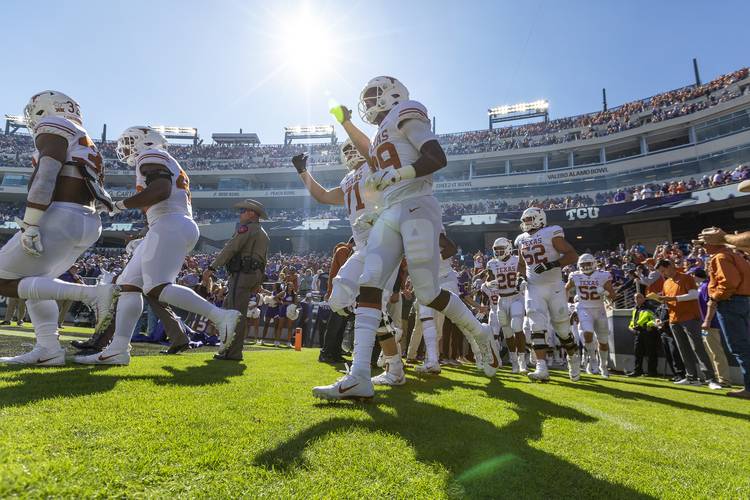 Texas linebacker Jett Bush (far right) takes the field alongside his teammates ahead of a game against TCU in Fort Worth on Oct. 26, 2019. [Stephen Spillman for Statesman]

With an assist from Jett Bush’s parents, Texas football coach Tom Herman presented a scholarship to the sophomore linebacker on Tuesday.

In a video published by the football team, Herman was seen notifying Bush’s parents about the decision to give their son a scholarship. Bush’s father then announced the news at a team meeting.

Bush walked onto the UT football team in 2019. He was rated as a two-star prospect while playing at Strake Jesuit High. Bush was committed to New Mexico State at one time, and he also received scholarship offers from Army and Air Force.

Bush appeared in four games as a true freshman. His biggest highlight was the recovery of a fumble on a kickoff against TCU. This fall, the 6-2, 230-pound Bush has appeared on the depth chart as one of the back-ups to junior Joseph Ossai at the “Jack” position.

“I say, ‘Man, you could be somewhere else starting right now, my dawg,'” Ossai told reporters on Tuesday. “I say it all the time, but he chose here. He chose here for his specific reasons. That’s on him with that decision and I support that decision. I’m glad he’s here. I love the guy. He’s just explosive, really quick, fast too. He works hard and he has this motor that keeps going and keeps going.”