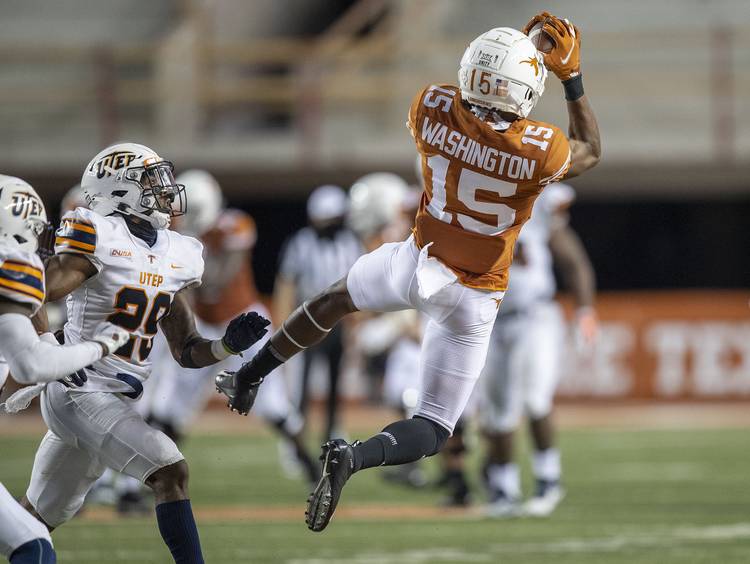 It’s halftime at Royal-Memorial Stadium. Texas, a 43-point favorite in its season opener against UTEP, is leading 45-3.

If this is Texas’ new normal, the Longhorns will take it.

The offense has chewed up yards and putting up points. Texas has 498 yards of total offense. Sam Ehlinger has already thrown for 400 yards and five touchdown passes, one of them the longest for the Horns since the 2016 season. The running backs look good, we’re getting used to new receivers making the same old big plays. The defense is pitching a shutout, three-and-outing its way to an impressive debut for new defensive coordinator Chris Ash and his 4-2-5 alignment that’s letting Joseph Ossai run wild.

But this isn’t the new normal. UTSA had to rally past FCS-level Stephen F. Austin last week and is starting a new quarterback and a redshirt freshman running back, and the Miners are looking woefully outmatched on defense, unable to stick with Longhorns receivers. They’re missing tackles, missing assignments in the secondary, have produced only six first downs and are mostly playing on their half of the field.

Still, for a season opener, there’s has been lots to like.

1. It was Roschon Johnson, not Keaontay Ingram, who got the start at running back. He burst free for a 35-yard gain on his second carry, but it was called back on a holding penalty by new center Derek Kerstetter.

We wondered how Texas would split carries and work Ingram, Johnson and five-star freshman Bijan Robinson tonight. So far the Horns are spreading the touches. Ingram has five carries for 27 yards, Johnson had three carries for 13 yards and a touchdown and Robinson has five touches (three carries for 5 yards, two catches for 9 yards).

2. Hello, Joshua Moore. His 78-yard touchdown on the first play of the game was Texas’ longest touchdown pass in four years, and it was an impressive play. Ehlinger hit him perfectly in stride on a slant route to the right, and UTEP safety Justin Price looked bad by taking the wrong angle, but seeing Moore accelerate across the field for the big-play score was the perfect way to start the game. And season.

3. Ehlinger and Brennan Eagles have looked off. Ehlinger missed him on a slant from the left side — basically, it was the exact same play that Moore had just scored on, only on the other side — and also threw incomplete Eagles’ way later on that drive again, too.

4. It hasn’t been perfect, of course. Cameron Dicker’s first field goal attempt of the season, from 43 yards, missed to the right.

6. Spotted: Brenden Schooler — UT’s other grad transfer receiver — flashed on one second quarter drive, bouncing off a tackle for a 25-yard gain and finishing that same drive with a 40-yard scoring scamper down the sideline. … Whittington, who signed with Texas in 2019 as the nation’s No. 2-ranked athlete but missed last season with an injury, has a couple of short catches and set up a score on a jet sweep. … Marcus Washington had a really nice 26-yard grab in traffic in the first quarter.

Joshua Moore: And he could have had two scores; he also was wide open on the same play that Brewer scored his touchdown. He’s getting Devin Duvernay-type targets through the first two quarters.

Josh Thompson: We thought Ossai would have the big night on defense, but so far, it’s Thompson. The cornerback has been all over the field. He forced a punt on a third-down solo stop in the second quarter and then on the next drive picked off a Gavin Hardison pass, the Longhorns’ first turnover of the season.

Speaking of Ossai, the Horns’ new Jack has four tackles and a half-tackle for loss.

Cade Brewer: A tight end making plays for Texas! And an honorable mention Horns up to Liebrock, the freshman tight end from Arizona who came up with a fumble recovery at the 5 as the lone Longhorn in a group of Miners at the tail end of an impressive catch and run from Black. That recovery set up a Horns touchdown.

Sam Ehlinger: The stats alone are ridiculous — 24 of 32 for 429 yards and 5 touchdowns. Not in the boxscore are the little things that are impressing tonight. On a 15-yard jet sweep by Whittington, it was Ehlinger leading the way as his lead blocker, and he laid down a great block on a Miners defender to spring Whittington to the 1-yard line. Earlier, Ehlinger tucked it and ran to convert a first down on a 6-yard keeper. He slid at the end of it.

Texas is 5-0 all-time vs. the Miners. UTEP won the opening toss, and the Miners will get the ball to start the second half.