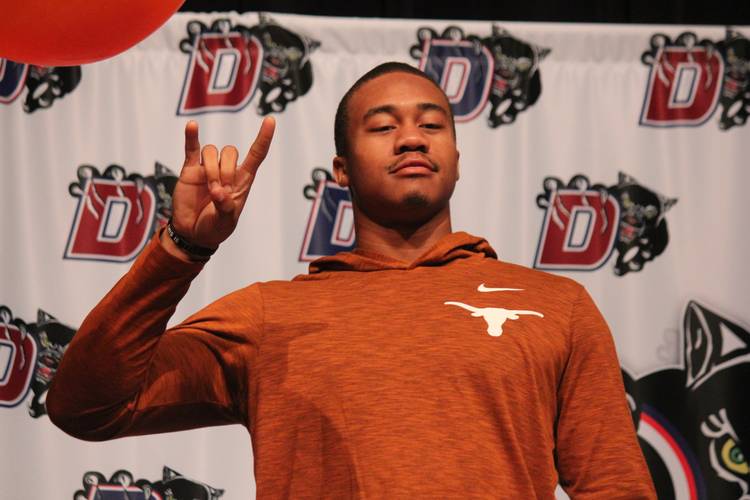 During a press conference on Monday, Texas coach Tom Herman said he’d like to get freshman quarterback Ja’Quinden Jackson into a game “at some point” this season.

Only two dual-threat quarterbacks in the 2020 recruiting class were ranked higher than Jackson, who was a four-star signee for Texas. During both his junior and senior years at Duncanville High, Jackson exceeded 1,000 rushing and 1,000 passing yards. Jackson, however, suffered a knee injury during the Class 6A, Division I playoffs this past December.

Throughout UT’s fall camp, Jackson has been cleared to practice. According to Herman, Jackson looked good during Sunday’s 7-on-7 drills. Herman also said that “we’re kind of easing him into more and more bodies being around him.” But despite being medically available, Herman assessed that Jackson is still working on his confidence.

“I would think JJ would be the first to tell you, he’s not quite there yet from a confidence standpoint to go out and do the things that he does well,” Herman said. “I think we’ll play that as it goes and just kind of judge by his confidence level.”

Herman added that this “is kind of a free year when it comes to eligibility. You don’t have to worry about four games or what games and redshirt, not redshirt, any of that stuff. I’d like to get JJ into a game at some point, hopefully multiple games. We’ll cross that bridge when we come to it.”

Read more: Texas doesn’t have a quarterback controversy in 2020, but what is the Longhorns’ backup plan?

Texas already has two capable back-ups for senior Sam Ehlinger. Redshirt sophomore Casey Thompson threw two touchdown passes in the second half of last week’s season-opening rout of UTEP. Hudson Card, who was the Class of 2020’s No. 2 dual-threat quarterback, directed UT’s final offensive series in the UTEP game. Against the Miners, Texas threw for a school-record 481 yards.