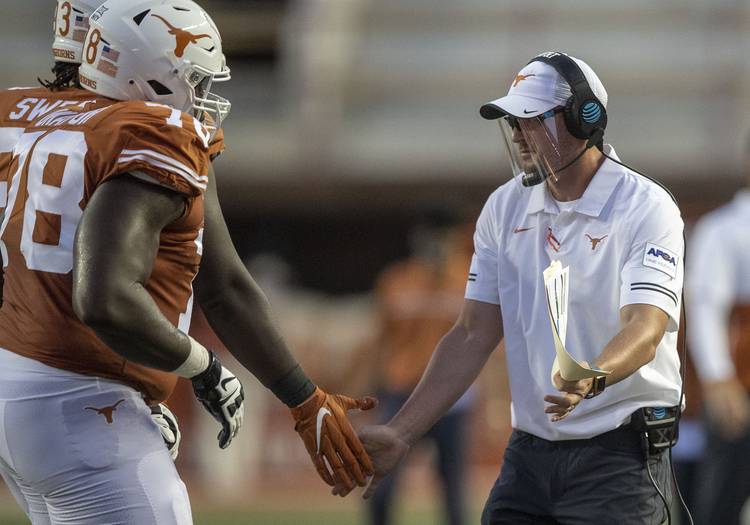 Texas is off this week, but head coach Tom Herman just met with reporters on Zoom.

Herman said Foster will “serve his penance internally, and it’ll be water under the bridge for us and his team.”

Injuries: WR Jordan Whittington suffered a small tear in his lateral miniscus. He got hurt right before halftime. He’ll have surgery in the next couple of days and will be out 3-4 weeks. … CB Josh Thompson suffered a bad cut on one of his ears — inside his helmet. He had several stitches on his ear. He practiced on Sunday. … WR Jake Smith is in rehab. “We expect to get (him) back.”

All those receiving weapons: The passing game had it going on against UTEP. Sam Ehlinger set career highs with 426 passing yards and five passing touchdowns in the first two quarters, then gave way to Casey Thompson, who threw a couple more scores. In all, 10 different Horns caught a pass and seven different players caught a touchdown. Herman was asked if that’s something we should be expecting from here on out.

“I don’t think you ever go in and say we want seven receivers to catch a touchdown pass, or we want 10 different guys to catch passes,” he said. “In the flow of the game, guys rotating in and out, this year we’ve got a bunch of guys who deserve to play at wide receiver. You will see more guys with a catch or two in most games, but you don’t ever say hey, we’re going to spread the wealth or we’re gonna focus on one guy. Every game, the plan is a little different.”

The two leading receivers are basically new to fans: Joshua Moore had six catches for 127 yards and the big first-play touchdown, and Tarik Black had five catches for 180 yards and a score.

The off week: The Statesman’s Cedric Golden asked about this bye week, and how confident Herman is that his players will stay safe and be responsible and make good decisions this week. Herman took a breath. “Really confident. I gotta be honest with you, and I may wake up tomorrow and it bite me in the you-know-what, but when I look around and read the news about what other teams are dealing with across the country, I tell our guys every day how proud I am of them. Every day. And it’s them. They’re doing it. Yeah, we’re educating and we’re telling them and we’re stressing the importance of being diligent and taking care of each other as well as yourself, but I’m sure other teams, other coaching staffs across the country are saying the same thing. … Doing it is the hard part. Because it is so inconvenient, it is so abnormal the things that these guys have to do to maintain a level of security within our program. It’s difficult.”

First-week lessons: Herman was asked what he learned about his team from the 59-3 opening win.

The coach tried to tap the brakes. This was UTEP, and Texas was favored to win by 44 points.

“The veterans were all here when we beat Louisiana Tech, whatever it was — 47-10 or whatever it was (it was 45-14) — so we all realize that Game 1s … although, the outcome being what it was Saturday night sure beats the alternative, I’m not saying we would prefer to be any other way, but I also think that we’re an extremely mature group that realizes this was one game against a Conference USA opponent, a nonconference opponent, that allowed us to get better, allowed us to get a lot of guys some experience, allowed us to work a lot of things full-speed that maybe we hadn’t many reps at full-speed. But I think we all know that we’re gonna be in some serious dogfights throughout the remainder of the season and we’re proud of the way that we played, but know that we have a lot of work to do.”

Near the end, the Statesman’s Brian Davis asked about roster management and the job Herman has done constructing it.

“Now you’ve got walk-on scoring touchdowns, you’ve got grad transfers coming in here contributing, you’ve got a solid overall nucleus, and you’ve got players pissed off they’re not playing enough,” Davis asked. “What does that say about where you have taken the overall quality of the roster itself?”

“That’s for you guys to decide,” Herman said. “We feel like we’re doing what we’re supposed to do at Texas, which is recruit at a very high level, a level compared to the elite teams in college football, and then develop them. And you’re finally seeing again what we’ve been talking about for four years, that it takes time. We’re still certainly not a finished product. We played one game against a nonconference opponent, so we are very confident in ourselves, but I also don’t want 59-3 against UTEP to be the high water mark, either.”

After leaving team, Texas S B.J. Foster will ‘serve his penance’ internally then rejoin the Longhorns