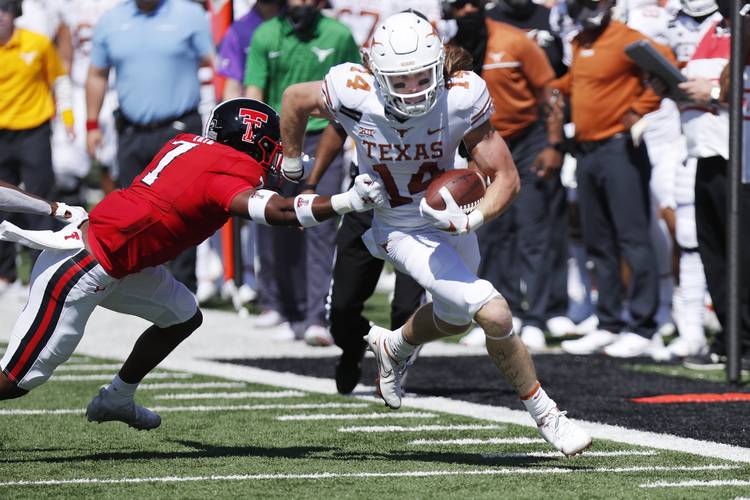 Eighth-ranked Texas found a way to wake itself up from offensive lethargy by scoring 15 points in the final couple of minutes — oh, and recovering an onside kick and converting a two-point conversion pass with 40 seconds left in there, too — just to rally and send things into overtime. Then, defense won the game. After Joshua Moore’s touchdown in the first possession of the extra period made it 63-56, the Red Raiders lost the game on a Caden Sterns interception.

Big 12 opening day yielded a big upset, though. Kansas State knocked off No. 3 Oklahoma in Norman. Then Texas almost fell in Lubbock.

They’re called special teams for a reason. And Tech’s certainly were — a successful onside kick and a blocked punt in the first half, then a muffed punt return for a fumble recovery for a touchdown in the second. Special teams can make heroes out of little-known names on the roster like Jade York and Xavier Martin and Jahdae Barron. But after giving up the three big special teams miscues, the Horns came up with a big one of their own — a blocked punt by Tyler Owens recovered in the end zone for a touchdown — to turn things around from a 31-28 game where the Red Raiders had momentum to a 38-28 game.

The Horns gave up 21 points in the third quarter, which saw them lose their halftime lead and sink into an offensive malaise. Sam Ehlinger, after looking super sharp in the first half, was 3 of 8 for 18 yards and an interception in the third quarter.

It would have been Texas’ first loss in Lubbock since 2008, the Michael Crabtree game. Instead, it was Texas’ sixth straight win at Tech.

The Big 12 is wide open. OU’s loss puts Texas in the driver’s seat. The Horns should move up in the polls and will either take this win and build off it, or it’s a sign that this is going to be a bumpy season, maybe for everyone.