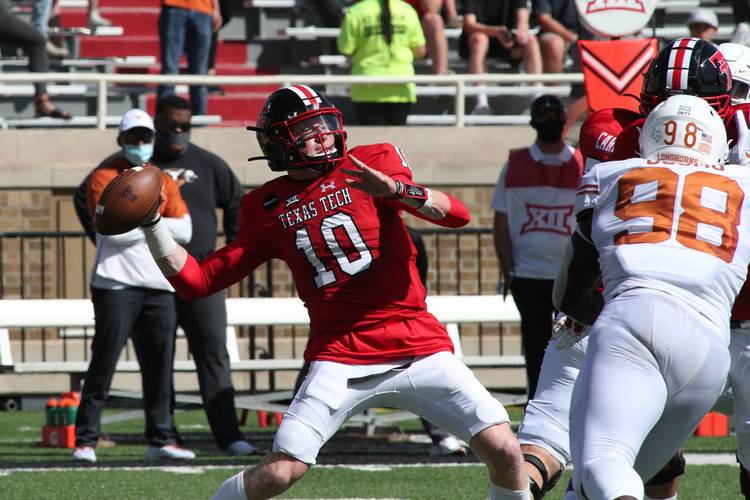 This one was going to go one of a couple of ways:

Either the Horns, who moved up a spot from No. 9 to No. 8 in the rankings after their 59-3 opening cakewalk over UTEP, were going to keep pouring it on and look like a top-10 team and control things from the start.

Or this one was going to be one of those Lubbock shootouts that Texas and Texas Tech can produce.

Or, coming right on the heels of Kansas State’s stunning upset of Oklahoma in Norman, the Horns would stub their toes, come out flat, and struggle.

The offense is humming, Sam Ehlinger’s making plays, the defense has produced a couple of turnovers and Texas is up by a couple of scores heading into the second half. Texas has 250 yards of total offense and has produced 14 first downs.

1. Alan Bowman’s first crack at Texas has been hit and miss. He’s 15 of 22 for 172 yards. He’s thrown three touchdowns but also has been picked off twice.

2. Player of the game so far? Either Ehlinger, who’s 14 of 18 for 130 yards and three total touchdowns, or Chris Adimora, who made a big interception late in the second quarter on the first play after Tech’s equally big blocked punt had set the Red Raiders up in the red zone, trailing 24-21. Adimora ran it back all the way to Tech’s 19-yard line. And earlier, he had a nice pass breakup on a third down in the first quarter to force a Red Raiders punt.

2. Texas looked sharp from the start. The Horns’ opening drive answered a lot of questions: They weren’t going to start slow, they didn’t look flat, and it was more of the same from Sept. 12. Just an efficient, down-the-field drive: Keaontay Ingram for 12 yards off the right side, then Ingram up the middle, bulling ahead for 5. There was a quick pass to Brennan Eagles for a first down. By that point, the Longhorns were already past midfield. In came Roschon Johnson. There was an Ehlinger keeper for 5, than an 11-yard slant pass to Joshua Moore. Brenden Schooler got involved with a pair of grabs and as news broke that Kansas State had just knocked off OU in Norman, the Horns were already inside the 10.

On a third-and-7 from the 9, Ehlinger had all sorts of time, but kept it and was stopped short 2 yards shy of the first down. Texas went for it on fourth-and-2. The Red Raiders were called for a red zone infraction, giving the Horns new life. Ehlinger ran it in for a touchdown on the very next play.

3. More committee approach to the running game. And again, so far it’s working just fine. Ingram got the start and has 8 carries for 29 yards and also has a catch. Johnson has 9 carries for 25 yards and the touchdown. Bijan Robinson, the five-star freshman, made his first appearance on Texas’ third drive with the Horns up 10-7. He has 4 carries for 12 yards. Johnson scored for the second time this season. And when Tech regained momentum and cut Texas’ lead to 24-21, the Horns trusted Robinson on the ensuing drive.

4. The defense has applied plenty of pressure, but doesn’t have a sack yet.

5. Against UTEP, Ehlinger and Eagles never quite looked like they were ever on the same page. Eagles finished with one catch, a touchdown in the third quarter thrown by Casey Johnson. But today’s a different story. Eagles got involved early with catches on the first two drives, including a nice play where he ran back to help out Ehlinger for an 11-yard gain.

Chris Brown: Picked off a bad Bowman pass, the second week in a row that the Horns have had an interception.

Sam Ehlinger: Nice move, Sam. After scoring on his first touchdown run of the season and then producing the 100th touchdown of his career on his scoring pass to Moore, the UT quarterback made a nice move to sidestep a Tech blitzer and then tucked it and ran for a 14-yard scamper.

Texas has won five straight matchups in Lubbock, going back to the 2010 season. The Red Raiders will get the ball to start the second half.