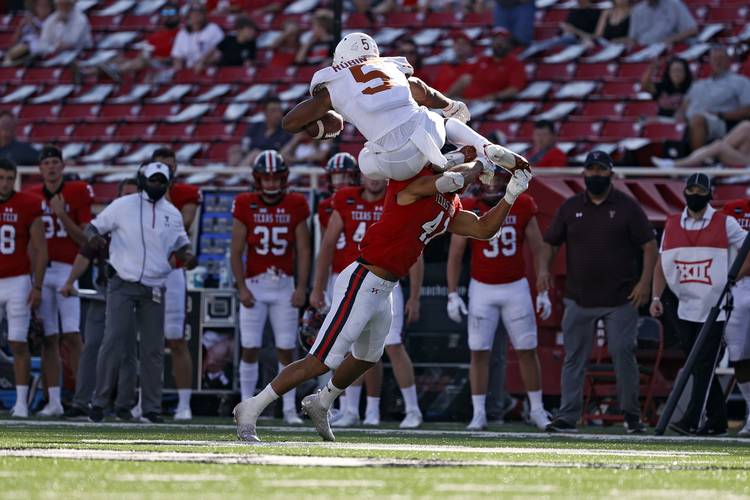 Texas running back Bijan Robinson attempts to leap over Texas Tech linebacker Jacob Morgenstern (41) in Lubbock on Sept. 26, 2020. A five-star signee in 2020, Robinson was injured on the play. [Brad Tollefson/A-J Media]

Bijan Robinson did not practice on Sunday, but Texas coach Tom Herman said his freshman running back is “moving around pretty good.”

Robinson left Saturday’s game at Texas Tech following the scary conclusion to an 11-yard reception. As he looked for more yardage on the play, Robinson attempted to hurdle a Red Raider. Robinson did not clear the linebacker and he landed on his neck after another defender hit him in the air.

Bijan Robinson shows you what can go wrong on the hurdle. pic.twitter.com/whXJLyG2tU

After the 63-56 win, Herman said that Robinson suffered a strain in his back. Texas now hopes to have him practicing by Tuesday or Wednesday. The top-rated running back in the 2020 recruiting class, Robinson has rushed for 50 yards on nine carries this season.

“I don’t know medically how he is OK after that, after seeing the still shots of it and whatnot,” Herman said on Monday. “Probably a testament to his athleticism and fluidity.”

Herman continued: “Everything’s a first when you’re a true freshman. That was his first time trying to hurdle a guy in college, and didn’t go near as well as it normally went at Salpointe High School in Tucson, Ariz. Lesson learned. He gets it, he chuckles about it even. There’s going to be other hard-learned lessons for him as a true freshman, but the best ways to learn them are to experience them.”

While Robinson was sidelined, Herman reported that sophomore receiver Jake Smith was a full-speed participant on Sunday. Smith had missed UT’s first two games with a hamstring injury. After catching six touchdowns passes last year, Smith was expected to play a bigger role in the slot for Texas this fall.

“Barring any setbacks this week, we expect him to be fully available to us on Saturday against TCU,” Herman said.