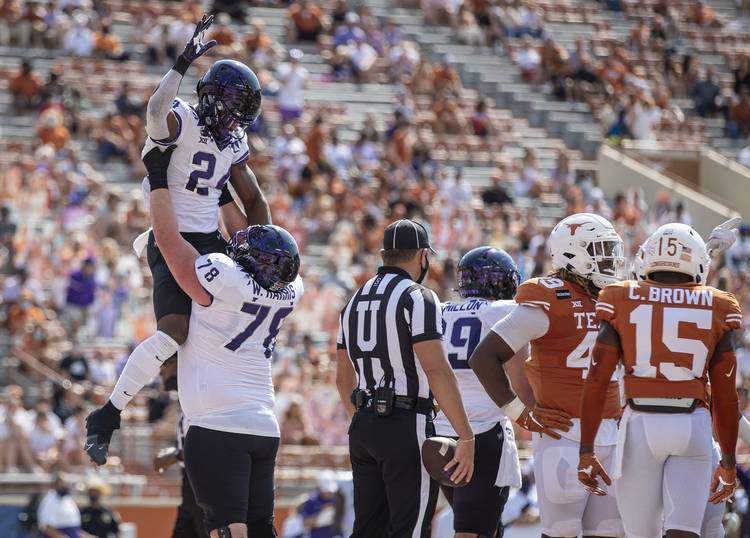 What is it about TCU? The Horned Frogs have been Big 12 kryptonite for Texas and things are going far from super for the No. 1 scoring offense in the country. Texas has at times looked stumbling and sluggish on offense only to occasionally flash with a big play. The running game isn’t doing much.

Don’t blame the Longhorns. Entirely, anyway. TCU’s front line has kept Sam Ehlinger in the pocket for most of the day and Max Duggan has made plays passing and running the Horned Frogs’ defense, which usually plays Texas tough, is again.

We’ll get to penalties in a bit. But there have been a lot of them. And they’re playing a big role today.

1. Who’s the first-half MVP? Sam Ehlinger? No. Max Duggan? No. Let’s go with Brad Van Vark, the head referee who’s getting way too much airtime today. This game meandered its way through a first quarter that had 12 penalties between the two teams, a steady stream of offsides, false starts, delays of game, blocks in the back, holds and pass interferences. And that was all in the first quarter. The second opened with a defensive pass interference penalty and a targeting ejection, both against the Horns, both within the first minute.

Texas penalties have taken away a huge kickoff return and a big pass play.

It’s been pretty ugly. The crowd noise may only be cranking at 25%, but the whistles have been full force.

There have been 17 total penalties in the first half.

2. Sam Ehlinger started this game cold, started to warm up at the end of the first quarter, heated up in the second, then cooled off again late. He started out 3 of 10 and is sitting at 5 of 16 for 132 yards, two touchdowns and an interception. The two touchdowns have come on the Horns’ two best offensive drives of the game — really, their only two good drives of the game — and the pick was a costly one. It led to the late field goal to make it a 20-14 game.

3. TCU’s Max Duggan is having a nice day. He’s 12 of 19 for 144 yards. As expected, his legs are getting him out of trouble (8 carries, 52 yards and a TD). He’s also taken three big hits — a hard one to the hip on a Josh Thompson blitz, a Joseph Ossai hit that was flagged for roughing the passer, and Juwan Mitchell’s pop under the chinstrap on the targeting penalty.

4. It’s been a series of answer drives for Texas, which has followed every TCU score with a score of its own. The Horns worked their timeouts to give Ehlinger 1:28 to work with at the end of the quarter, but his first-down pass was picked off by La’Kendrick Van Zandt, who returned it 37 yards down to the Texas 5.

4. The defense has applied plenty of pressure, but doesn’t have a sack yet. There have been some costly penalties back there, though. Caden Sterns has eight tackles to lead all players.

5. The Horns’ top receivers so far have been Jake Smith and Brennan Eagles, but no player has more than two catches. Tarik Black caught a pass; he didn’t have a reception in Lubbock after catching five in the season opener. Jared Wiley had a big 50-yard catch.

Texas owns this head-to-head series, but the Horned Frogs have controlled things since they joined the Big 12. TCU is 6-2 vs. the Horns in Big 12 matchups. TCU will get the ball to start the second half.