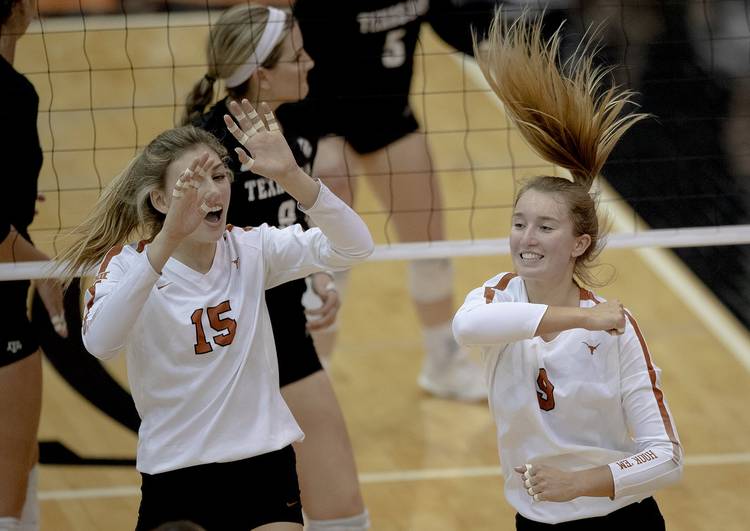 Senior setter Ashley Shook will leave the Texas volleyball team after this semester, the school announced on Monday.

Shook is in line to graduate this semester with a degree in Human Dimensions of Organization and a minor in business. She would then look to be a graduate transfer at another school that offers indoor and sand volleyball.

“I am very thankful for all the relationships I have made here at the University of Texas,” Shook said in a statement. “While I am looking forward to starting the next chapter of my life, I will enjoy spending these last two months competing with my teammates to achieve our goal of winning another Big 12 Championship.”

Advertisement
When she signed with Texas, Shook was regarded as the sixth-best prospect in the 2017 recruiting cycle. Shook was installed as a starter once she got to campus, and she averaged 10.8 assists per game as a freshman. That fall, she was named the Big 12’s freshman of the week on three separate occasions. But during that 2017 season, a UT team that had championship aspirations underachieved and was bounced in the postseason’s fourth round.

Shook remained UT’s starting setter at the beginning of the 2018 season. Shook struggled as a sophomore, and she was eventually benched in favor of then-freshman Jhenna Gabriel.  Gabriel has held onto that job ever since.

The 6-1 Shook, who is five inches taller than Gabriel, has made a couple of notable relief appearances since Texas swapped setters. She has also been named a team captain for the 2019 and 2020 seasons.

In a press release, Texas coach Jerritt Elliott said that UT would help Shook “find a new home to achieve her MBA.” Elliott said that Texas previously did the same thing with Amy Neal and Cat McCoy. Neal and McCoy ended up playing sand volleyball at TCU and Washington after their careers concluded at Texas.

“Ashley has been a huge part of this program and her impact has made this program what it is today. She is a wonderful human being that has earned the respect of her teammates and staff. We are lucky to call her one of our captains,” Elliott said.  “She has one more year of indoor and two years of sand and whoever lands her will be thrilled to have a quality person and player like Ashley.”

Due to the coronavirus pandemic, athletes won’t be charged a year of eligibility if they play this fall. So, Shook can contribute to the chase of a conference championship. (Shook has appeared in eight sets over UT’s first four matches). She, however, will not be with the team if the Longhorns qualify for the NCAA tournament, which has been moved to April. Texas will still have Gabriel and freshman setter Naomi Cabello on its roster.