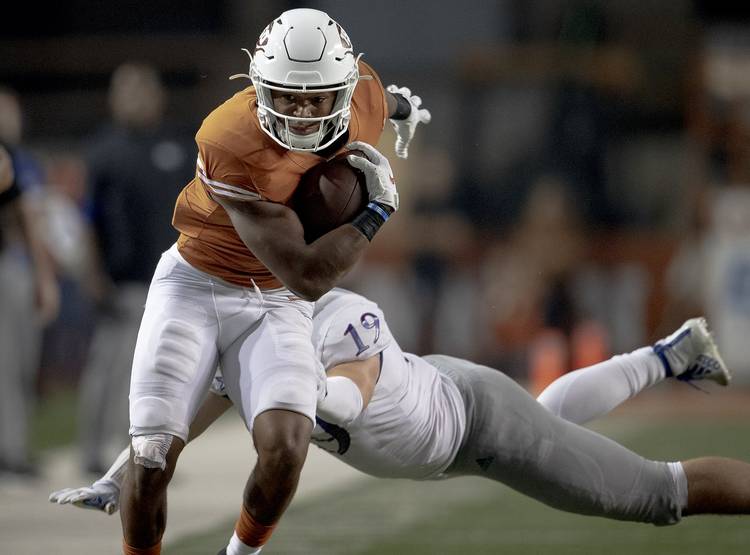 Texas running back Roschon Johnson has opened his sophomore year with a touchdown in each of his three appearances. On Saturday, Johnson could get a chance to run that scoring streak to four straight games.

At his weekly press conference on Monday, Texas coach Tom Herman said that Johnson “should be available to us hopefully early in the week in practice.” Johnson exited the second half of a 33-31 loss to TCU this past weekend with a shoulder sprain.

Johnson is averaging five yards per rush this season, and his 40-yard run against TCU is the running game’s longest gain. He has rushed for two touchdowns and scored on a 7-yard catch.

While Johnson could play against the Sooners, Ayodele Adeoye will not. The sophomore linebacker needs to have shoulder surgery. Herman also noted that defensive reserves Tyler Owens (knee and hamstring sprain) and Reese Leitao (knee sprain) are doubtful for this weekend.

The Longhorns, though, have given receiver Joshua Moore a “probable” designation. The knee injury that UT listed Moore with after the TCU loss was downgraded to a bone bruise by Herman on Monday. Herman also noted that receiver Jordan Whittington practiced on Sunday. Whittington has not played since he injured his knee in Texas’ opener against UTEP.

“It went well,” Herman said of Whittington’s practice. “We expect him to practice this Tuesday, and if he makes it through practice this week to be available to us for the game on Saturday.”