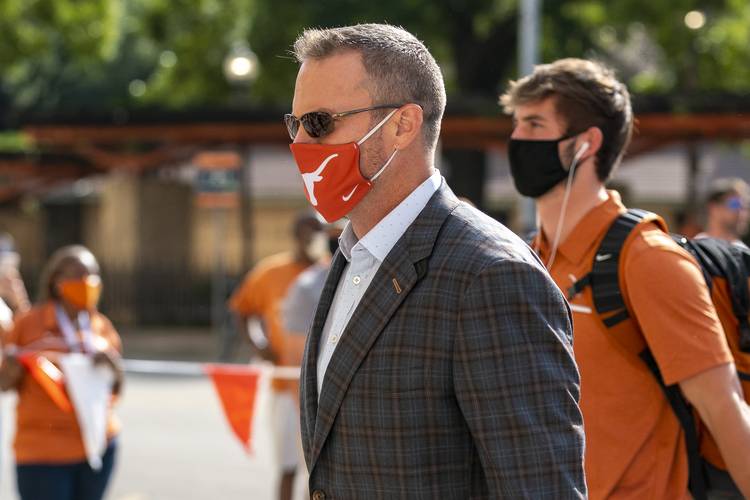 First things first, just where’s this team at? The coach opened his Zoom with an update.

“I felt a lot of — and heard, and saw — a lot of accountability from most everybody on our team for the poor performance on Saturday, which was very encouraging to see,” he said. The team practiced on Sunday and started watching , watched OU game film Sunday night.

“Our players are eager to roll up their sleeves, get back to work and make sure we improve the things that we know we can, that are fixable, improve-able and hopefully have that translate better on Saturday,” he said.

Herman more than once mentioned that Texas is hardly in panic mode after the TCU loss.

Injuries: Linebacker Ayodele Adeoye re-aggravated his injured shoulder injury against TCU. The Horns were hoping to avoid surgery this season, but he’ll have surgery to repair the injury and is out. … Running back Roschon Johnson suffered a sprained shoulder “should be available to us” and probably will resume practicing early this week. … Reserve defensive lineman Reese Leitao (sprained knee) and reserve safety Tyler Owens (knee and hamstring) are both considered doubtful for Saturday. … Wide receiver Joshua Moore (bone bruise) will probably play.

Also, Jordan Whittington returned to practice on Sunday. “It went well,” Herman said. If Whittington can practice Tuesday and make it through this week without any setbacks, he should play Saturday.

That’s notable because through three games, we have yet to see Texas with both Whittington and Jake Smith play in the same game. Smith made his season debut against TCU and was Texas’ top receiver.

Good point: “If we cross the goal line and score a touchdown at the end of the game there and win the game, does that erase all of the issues? No, it doesn’t,” he said. “You’ve got the same issues win or lose. We would have had all the issues that we’re trying to correct this week. They would have still existed.”

If that’s the case, here are some Texas to-do’s:

Lean a little bit more on the running game.

Keep up the quarterback hurries and hits, but start converting them into sacks.

Penalties. Texas has committed 28 of them through three games, or an average of about nine flags per game.

Texas is converting 42% of its third downs into first downs. The Horns were at about 49% last year, when they ranked seventh nationally.

Special teams. Ryan Bujcevski is averaging less than 40 yards per punt. The big plays are getting called back. And we’re only two weeks removed from the Tech debacle of blocked punts, muffed returns and getting caught off-guard on the onside kick.

Dropped passes. It’s not a rampant issue, but drops sure have come at some costly times.

Texcetera: In the for-what-it-was-worth department, Herman said he felt that despite the loss, things improved on tackling and special teams fronts against TCU after what we saw in Lubbock. … This will be a Texas-OU game like none other — no State Fair, a dramatically scaled-back crowd, two teams in fourth and eighth place in the conference standings.

Saturday is an 11 a.m. kick at the Cotton Bowl. The Sooners are 2.5-point favorites. The Horns, at 1-1, are in a four-way tie for fourth place in the Big 12 behind Oklahoma State, Iowa State and Kansas State, all of whom are 2-0. OU, Texas Tech and Kansas are still looking for their first conference W.

Ashley Shook enters the transfer portal, but volleyball’s captain will remain at Texas for now