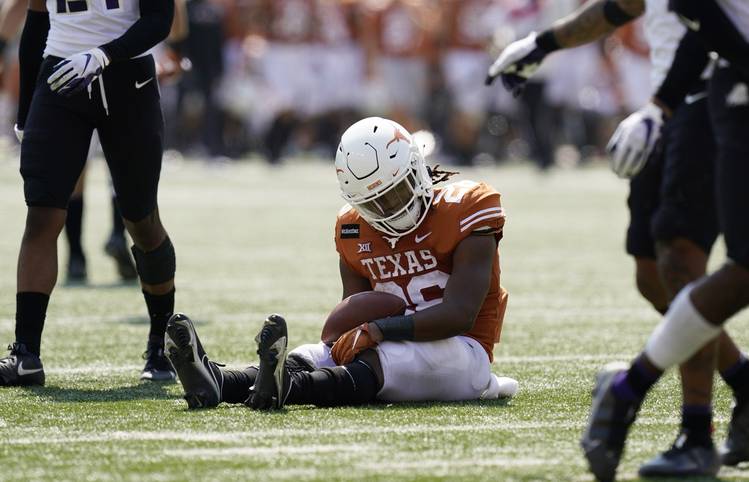 Of the 141 plays in UT’s 33-31 loss to TCU on Saturday, perhaps none was more important than junior running back Keaontay Ingram’s lost fumble at the goal line.

The turnover gave TCU the football back with less than three minutes to go. Nursing a 33-29 lead, the Horned Frogs killed the clock before taking a safety on the game’s final play.

After the loss, Texas coach Tom Herman fielded a question about why Ingram was still in the game after he had covered 68 yards over the previous two snaps. (Answer: Roschon Johnson was hurt and Bijan Robinson had barely practiced that week). Quarterback Sam Ehlinger explained why he didn’t call his own number on the play. (Answer: Ehlinger thought Ingram was a better option based on the look that TCU’s defense was giving).

On Monday, another question was asked about the turnover. Why was Texas in such a hurry to run that pivotal play?

On the game’s previous play, Ingram had been tripped up just short of a lead-changing touchdown. Ingram was credited with a 16-yard run to the TCU 1, and the clock temporarily stopped with two minutes and 56 seconds left since he had gotten a first down. Texas rushed to the line of scrimmage and was set after only a few seconds had run off the clock. Texas snapped the ball at the 2:48 mark.

On Monday, Herman was asked to explain why the Longhorns didn’t slow things down at the goal line. Ingram, after all, had recorded a 52-yard catch on the play before his 16-yard run. And if things had gone right for Texas, TCU would have been left with plenty of time to respond.

Herman defended the decision to run tempo on the four-play drive. Texas had gotten the ball at its 25 with 4:01 left, and its first priority was scoring. He did say that the Longhorns would have changed their tone had they held onto the football on that first-down play.

“At the end of the game, that was absolutely the right way to play it,” Herman said. “With four minutes left, you’re going to try to go score the game-winning touchdown and have you leave your opponent little to no time on the clock.

“Had we maintained possession on the first-and-goal from the one, our plan on the headset, we were going to huddle up and use every ounce of that play clock that we could and game clock to try to go take the lead and leave our opponent as little time left on the clock.”