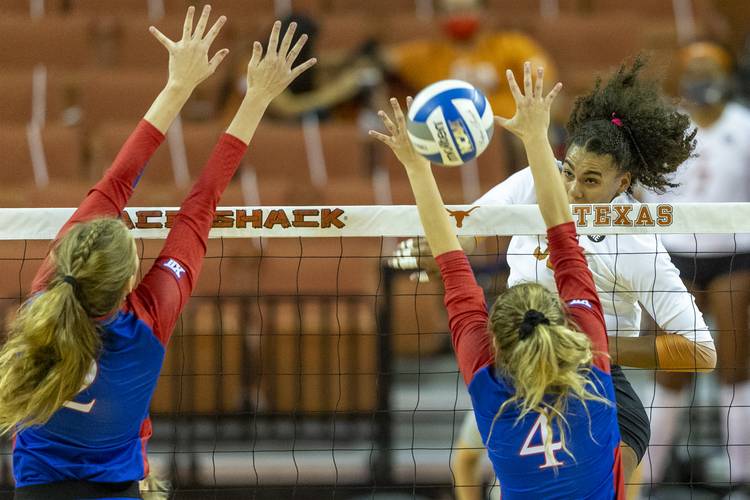 Texas outside hitter Logan Eggleston (33) hits the volleyball past Kansas' Rachel Langs (2) and setter Sara Nielsen (4) at the Erwin Center on Oct. 1, 2020. [Stephen Spillman for Statesman]

The Big 12 has handed out an award that is so nice, Texas junior Logan Eggleston has won it twice.

Eggleston was named the Big 12’s offensive player of the week on Tuesday. UT’s All-American outside hitter is the only player to earn that honor this season. She also picked up this award following the season’s first week.

Eggleston led Texas in kills during both of last week’s sweeps of Kansas. In addition to the 34 kills that she accumulated over those six sets, Eggleston hit over .340 in both matches.

For the season, Eggleston is averaging 5.31 kills per set. The next-best mark in the Big 12 is Oklahoma freshman Guewe Diouf’s 4.43 kills per set. Eggleston’s .327 hitting percentage ranks 10th in the conference.

Texas (4-0) will host Iowa State (2-2) on Thursday and Friday. The Longhorns and Cyclones were ranked first and 13th in the AVCA’s most-recent fall poll.