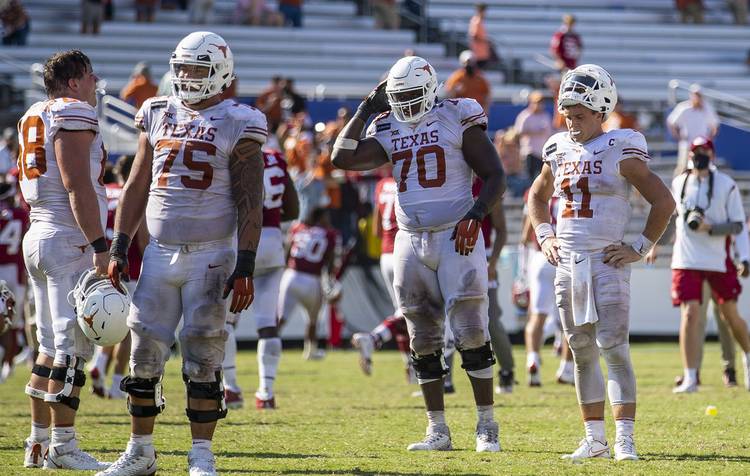 Through the years, this Texas vs. Oklahoma game has been a shootout, a rivalry and a showdown. Today ended up being all three.

Sam Ehlinger’s shot into the end zone in the fourth overtime was just a little too high for 6-foot-3 Tarik Black and was picked off by Oklahoma safety Tre Brown, giving the unranked Sooners a wild 53-45 shootout win over No. 22 Texas, dealing a serious blow to the Longhorns’ season, wiping out what was another Lubbock-esque fourth quarter comeback and successfully stopping the bleeding from back-to-back Big 12 setbacks.

The team with the redshirt freshman quarterback outplayed the one with the senior one. Oklahoma’s Spencer Rattler started shaky, committed two early turnovers, was replaced by backup Tanner Mordecai and then regrouped in the second half and won it in overtime, saving the Sooners with a fourth-and-goal run up the middle in the second overtime and then finding Bob Stoops’ son for what turned out to be the game winner.

The game sealer was Brown’s pick.

We were prepared to stick a fork in the Horns’ season after watching them lounge their way through three-and-a-half quarters. The defense kept this game close in the first half but began to wilt in the third quarter, when the Sooners pounded out a 17-play touchdown drive that took eight minutes off the clock. Where did the Texas comeback come from? In the end, this loss was a combination of too little too late, an off day for Ehlinger till the end, a couple of costly special teams mistakes and some costly penalties from the offensive line. The running game struggled, the passing game was off till the fourth quarter and strangely Texas looked flat for what is its biggest game every season.

The roaring comeback and thrilling ending at least gives hope that Texas can at least try to turn things around. The Horns will have a week to think about it.

Goodbye, Big 12 championship hopes — Texas’ first three conference efforts have been a come-from-behind overtime win in Lubbock, a deflating home loss to TCU and now an overtime loss. Think Texas run the table with Oklahoma State, Iowa State, Kansas State and Baylor still to go? Same here. The CFP has gone from a dream to a hope to a pipe dream. That door opened when the Big Ten and Pac-12 opted out of the season (before opting back in) and widened with Oklahoma’s conference-opening stumble, but that door is now closed. And so long, Heisman hopes.

1st quarter: Oklahoma 10, Texas 0. Things started out great for Texas — a shaky OU three-and-out to start the game — but soon went downhill: A Keaontay Ingram fumble, a blown coverage on a Sooners touchdown pass and overall offensive malaise. But the quarter ended on a high note: DeMarvion Overshown picked off Spencer Rattler’s third-and-9 effort and returned it to OU’s 17-yard line on the final play.

2nd quarter: Halftime — Texas 17, Oklahoma 17. The second quarter was OU’s to lament. Rattler’s ill-advised second turnover of the game — his curious flip of the ball to avoid a sack was ruled a fumble that Juwan Mitchell plucked inside the red zone — was his final play of the half. His right arm was being looked at on the sideline as Tanner Mordecai took over for OU. Sam Ehlinger’s two scoring runs helped even things at the break.

3rd quarter: Oklahoma 31, Texas 17. Rattler returned for the Sooners, sparking two scoring drives to open the second half that ended with short T.J. Pledger runs. Rattler made nice plays via a pass and a scramble on a 17-play, 87-yard drive that made it a 31-17 game. That drive at up 8:07 of clock.

4th quarter: End of regulation — Texas 31, Oklahoma 31. Just like in Lubbock, Ehlinger directed two late scoring drives to in the final minutes just to force overtime, finding Joshua Moore for his fifth touchdown of the season and then Keaontay Ingram for the tying score with only 14 seconds left.

Overtime: Final — Oklahoma 53, Texas 45. The overtime itself was a game within a game, as both sides traded touchdowns. There was a missed field goal by Cameron Dicker and a subsequent shanked missed field goal Gabe Brkic for the win.

Horns up: Offense. Don’t ever count Ehlinger out.

Horns up: Defense: Caden Sterns missed today’s game and the Horns went heavy with backups B.J. Foster and Chris Brown. They both shined. Foster led the team with 13 tackles and a pass breakup, and Brown (9 tackles) recovered a fumble in the red zone to snuff an OU scoring opportunity. … Joseph Ossai, coming off the big game against TCU, forced a red-zone fumble by staying in the play on a run downfield and stripping the ball. He also had two tackles for loss and a half-sack … D’Shawn Jamison broke up a touchdown catch in the second overtime. And DeMarvion Overshown had 11 tackles and an interception.

Third-and-wrong. The Horns have been so effective on third downs the last two years — ranking 18th nationally in third-down conversions two years ago and seventh in 2019 — but had slipped to 26th heading into Saturday’s game. Texas was at a .261 success clip against the Sooners, going 8 of 18 on third downs.

About that running game. It just wasn’t there today. The Horns’ final numbers were acceptable (averaging 4.1 yards per carry, with four rushing scores). But neither Keaontay Ingram (3-15), Roschon Johnson (3-minus 3) nor Bijan Robinson (5-17) were effective. Take away Ehlinger’s 23 carries, 112 yards and 4 TDs, and that running game was scary bad.

About that passing game. Ehlinger had his worst game in awhile. As always, he made plays when he tucked it and ran, but he really struggled with his throws, missing Brennan Eagles, Joshua Moore and Bijan Robinson on downfield shots, missing open throws to Robinson and Tarik Black, and throwing two critical picks into the end zone.

Ehlinger will finish his career with a 1-4 head-to-head mark against the Sooners.

Penalties: The four most egregious …

More special teams woes. Ryan Bujcevski’s rugby punt effort backfired in the second quarter of a 10-10 game because he took too long to kick it and also drifted directly into David Ogwoegbu’s rush. And Bujcevski had another miscue early in the third quarter, a late hit penalty on a punt return that set the Sooners up at UT’s 30. Oklahoma scored a touchdown to go up 24-17. On the plus side, Bujcevski had two punts downed inside the 5.

Next up for Texas: The Longhorns have a week off — to stew over this loss, continue stewing over the last two losses, or simply catch their breath, regroup and work on a now long list of fixes, and probably all of the above. Ehlinger can probably use some time to heal up; he took a beating today.

Next game is Oct. 24 at home against Baylor.