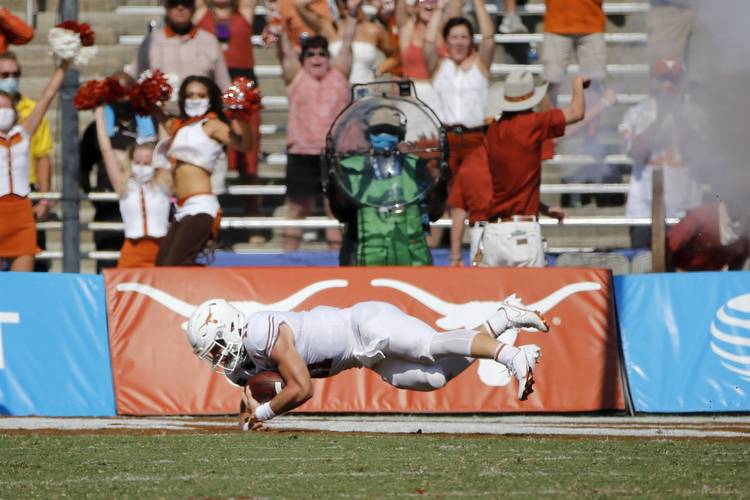 It’s halftime at the Cotton Bowl. Texas is leading Oklahoma 20-17.

Neither side is going to be happy at the break. Lots of mistakes. Missed chances. Texas has no running game beyond Sam Ehlinger. And those penalties! Oklahoma, meanwhile, had to replace starting quarterback Spencer Rattler. Maybe it was because Rattler was shaken up, maybe it was the two early turnovers. Both defenses have made plays.

But with a half to go, there’s lots at stake. Oklahoma is either going to drop to 0-3 in the conference or Texas is going to go up 2-1. Both desperately need a win today to right their seasons.

1. Texas is looking sloppy. The Horns are all over the board — a special teams miscue that led to a Sooners touchdown, another Keaontay Ingram fumble, an unnecessary late hit shove that could have been a four-point swing and a defensive breakdown that led to an easy OU score, but also forcing three turnovers and finding a way to hang in there.

2. The Sooners are having issues of their own. Rattler has thrown an interception and lost a fumble. He was replaced by Tanner Mordecai in the second quarter. Rattler’s right arm was being looked at.

3. Texas’ running game hasn’t done much. Keoantay Ingram (1 carry, 13 yards and a fumble), Roschon Johnson (3 carries for negative-3 yards) and Bijan Robinson (2 carries, 5 yards) have been quiet, none of them producing a flash play yet like we’ve seen from their OU counterparts; Marcus Major and T.J. Pledger have both had 20-plus yard runs and Major scored a touchdown.

4. Ehlinger, as a passer, looks off. He’s missed on downfield shots to Brennan Eagles and Joshua Moore (twice). But Ehlinger, as a runner, is keeping Texas in play today. He’s scored twice on runs. For the game, he’s 12 of 22 for 123 yards passing.

5. Jordan Whittington, who hasn’t played since the opener, is Texas’ leading receiver so far. He has five catches for 38 yards, including a 20-yarder. We haven’t seen Jake Smith. Joshua Moore has three catches. Brennan Eagles and Tarik Black all have one grab each.

6. Caden Sterns isn’t playing today. The Horns are using B.J. Foster and Chris Brown instead at safety and they both are responding. Foster is this game’s leading tackler with nine stops. Brown recovered a fumble.

7. The offensive line isn’t doing Texas any favors. The running game is struggling. Derek Kerstetter’s shoving penalty took away a fourth-and-goal at the 1 (the Horns had to settle for a field goal), Junior Angilau’s false start took away a field goal try at the end of the half (and what would have been a 20-17 lead), and Ehlinger has been sacked twice.