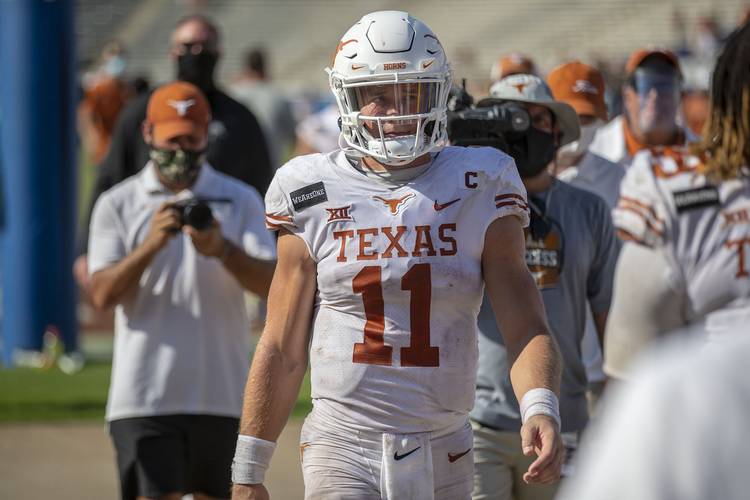 On Monday, Tom Herman said that the UT football players will be “encouraged” to stick around for the postgame playing of “The Eyes of Texas.”

Following UT’s 53-45 loss to Oklahoma at the Cotton Bowl this past Saturday, senior quarterback Sam Ehlinger was among a few players who stayed on the field for the school’s alma mater.  Widely-circulated photos of an isolated Ehlinger drew the ire of many fans on social media.

Breaking | Sam Ehlinger is the only Texas player to stay for the singing of "the Eyes of Texas" post game. pic.twitter.com/RFlHUQGa4W

Ahead of his weekly press conference on Monday, Herman addressed the controversy surrounding “The Eyes of Texas.” While reading his own prepared notes, the fourth-year coach said the UT players and coaches would be asked to stay on the field and recognize their fans in the stands. Those who did not feel comfortable doing so will still be allowed to leave.

“There are very strong emotions on both sides,” Herman said. “This is something we’ve been working through since our campus initiatives were announced back in July. As a football program, we’ve discussed this and will continue to.

“I’ve encouraged our staff and team to join me in participating after games if they are comfortable doing that. I do believe it’s important that we acknowledge and thank our fans after a hard-fought game.”

The existence of “The Eyes of Texas” has been scrutinized since this summer. The song is a beloved tradition at Texas, but its history includes minstrel shows and a saying by Robert E. Lee. This summer, an athlete-led protest called for the university to axe the song.

Texas administrators opted to keep “The Eyes of Texas,” but athletes were told that they would not be forced to sing along anymore. The university recently formed a committee to examine the song’s history.

Two weeks ago, players on the Texas volleyball team huddled together after its matches against Kansas and declined to acknowledge “The Eyes of Texas.” Against Iowa State a week later, the athletes stood in a line with their Horns up during the postgame playing. They did not sing along.