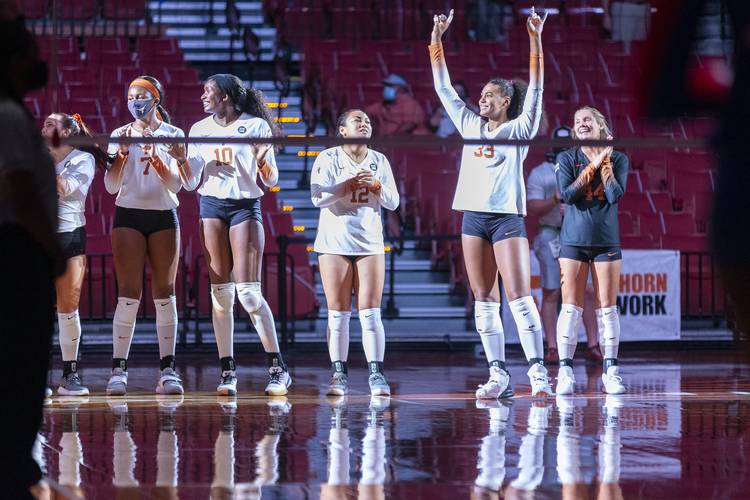 Texas outside hitter Logan Eggleston (33) takes the court against Kansas before a Big 12 volleyball match at the Erwin Center on Oct. 1, 2020. [Stephen Spillman for Statesman]

Texas junior outside hitter Logan Eggleston was once again named the Big 12’s offensive player of the week on Tuesday.

This marks the third straight week that Eggleston has won the award. The Big 12 has only handed out this honor to Eggleston this season.

🏐 Logan Eggleston: hit .409 in 2 matches & totaled 30 kills
🏐 Shanel Bramschreiber: set career-high in digs with 39 to avg 4.88 per set
🏐 Caroline Crawford: played in all 10 sets finishing with a career-high 13 kills in the last match pic.twitter.com/MhlwLh1YDI

Before Tuesday, no Longhorn had ever won the Big 12’s weekly award for offense or defense over three straight weeks. Michelle Kocher and Haley Eckerman were both named the conference’s top rookie three times in a row during the 2008 and 2011 seasons.

In UT’s two matches last week, Eggleston totaled 30 kills. She hit .409 over those two matches. With Eggleston leading the way, Texas improved to 6-0 with its two sweeps of Iowa State.

On Friday and Saturday, Texas will travel to Kansas State. Texas (6-0) and Kansas State (3-1) are currently ranked first and 15th in the AVCA’s fall poll.