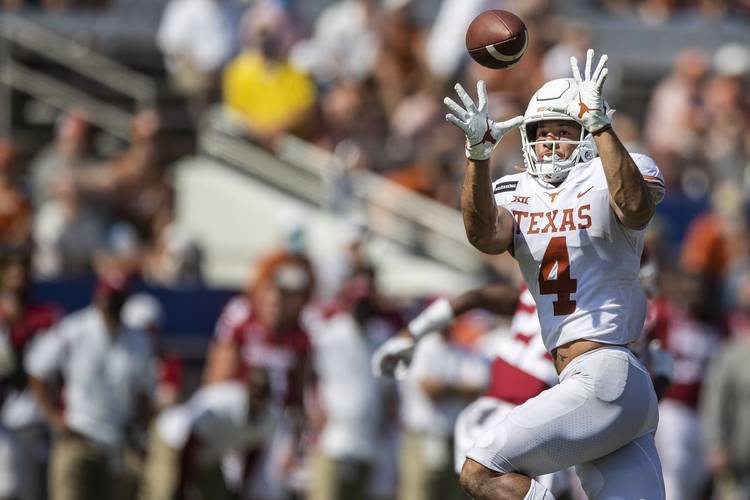 Texas receiver Jordan Whittington (4) pulls in the football during a game against Oklahoma at the Cotton Bowl in Dallas on Oct. 10, 2020. [RICARDO B. BRAZZIELL/AMERICAN-STATESMAN]

Coming off a breakout performance against Oklahoma, Texas receiver Jordan Whittington has had his encore postponed.

Texas coach Tom Herman added Whittington to the injury report on Monday with what he described as a “very, very freak sprain of his hip flexor.” Whittington won’t need surgery for this injury. Herman, however, said that the redshirt freshman will need to rest for a couple of weeks.

This was the latest in a growing list of injuries for Whittington, who was a five-star signee in UT’s 2019 recruiting class. Whittington played in only one of last season’s games because of a sports hernia. Whittington appeared in the first half of this season’s opener against UTEP, but he missed the next two games with a knee injury.

On Monday, Herman was asked about Whittington’s state of mind following his most-recent injury. Herman didn’t want to speak for his player, but he conceded that Whittington was “down in the dumps” after Sunday’s diagnosis.

Said Herman: “It is discouraging, and we feel for him. My message to him is he’s got a long career. He redshirted last year, this year doesn’t count. You know, not that anybody wants to be in college for six years and I don’t think that’s anywhere near in the plans for J-Whitt, but he’s got a lot of football ahead of him. Last season, it was one injury that took the whole season up. This year, it’s a couple minor ones that are taking a couple weeks here and there. I think any of us would rather have a couple minor injuries that take a couple weeks and get us back on the field than a major one that keeps us out a whole season. I think he understands that. I think it’s hard to see the forest for the trees when you’re 20 years old and you’ve gone through the last couple seasons that he’s had, but he has a ton of football left in him. I think he realizes that.”

The 6-1, 209-pound Whittington was UT’s starting slot receiver against Oklahoma on Oct. 12. He was responsible for 10 of the Longhorns’ 30 receptions. That effort made Whittington the third UT freshman to record double-digit catches in a single game. Herman noted that Whittington also logged a “player load output” of over 800 in the quadruple-overtime marathon. (According to Herman, the normal player load output ranges from the high-500s to low-600s).

After the Oklahoma game, Whittington told media members that “It felt amazing being back out there. I’ve always wanted to help this team contribute, help the team win.”

Texas (2-2) will host Baylor (1-1) on Saturday afternoon. With Whittington out, sophomore Jake Smith will likely be Texas’ starter at “H” receiver. Smith himself has been sidelined for three games this fall with an ailing hamstring, but he did record a team-high six receptions against TCU on Oct. 3. Herman reported that Smith practiced last week. Kai Money, a walk-on sophomore, and Brenden Schooler, a graduate transfer from Oregon, have also run routes out of the slot.