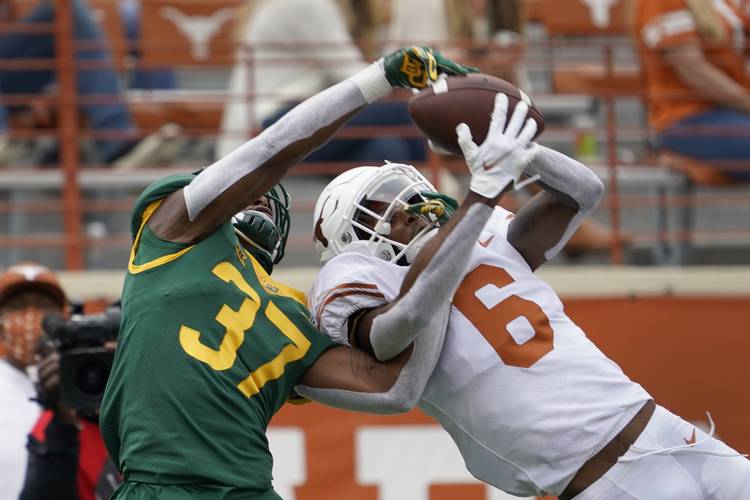 Baylor's Mark Milton (37) knocks the ball away from Texas' Joshua Moore (6) during the first half of an NCAA college football game in Austin, Texas, Saturday, Oct. 24, 2020. (AP Photo/Chuck Burton)

Texas, the top scoring team in the country after averaging a blistering 50 points per game, tapped the offensive brakes on Saturday and in the process reversed its two-game skid, reestablished itself in the Big 12 race and overcame a slow start to control the final three quarters to beat Baylor 27-16 at Royal-Memorial Stadium.

Tom Herman notched his 50th career coaching victory. Sam Ehlinger produced three touchdowns. The Horns cruise-controlled their way through this one against a Baylor team that hadn’t played since Oct. 3 and has had three games postponed or canceled because of COVID-19 issues.

After a slumbering first quarter, the Horns rattled off 20 unanswered points by producing four straight drives of 11, 9, 7 and 12 plays. Before you knew it, it was 20-3 midway through the third quarter and Baylor looked completely disinterested in making this a game. Sam Ehlinger finally got that elusive win over the Bears; he was hit-and-miss in the passing department but did make a couple of big throws and was effective again as a runner. There wasn’t an alpha receiver, just a handful who made important contributions.

A loss would have been, around here, fairly cataclysmic. Texas avoided a three-game losing streak and along the way may have made fans feel a little bit better about this team. There was some adversity, shrugging off the slow start and early deficit and later sealing the victory with a deliberate fourth quarter drive that ate up clock and halted Baylor’s momentum.

1st quarter: Baylor 3, Texas 0. The Horns looked sluggish and were shut out in the first quarter for the second game in a row. Texas slumbered through the quarter, producing 37 total yards in three drives. Not that the Bears did much, either, but they did string together a 12-play drive that ended with a goal-line stand by Texas and a chip-shot field goal.

2nd quarter: Halftime — Texas 13, Baylor 3. Sam Ehlinger took three shots downfield and connected on two of them, one a big 72-yard pass to Tarik Black on a blown coverage, the other a 42-yarder to Joshua Moore that was equal parts good throw and catch. The Horns had to settle for a short field goal but had 11-, 9- and 7-play drives, helping them score 13 unanswered points.

3rd quarter: Texas 27, Baylor 3. The Horns picked up where they left off in the second quarter, moving the ball fairly methodically, if not electrically, with a steady dose of runs. Ehlinger connected on his third long pass of the day, a 47-yarder to Jared Wiley, and the Bears’ offensive misery continued with a 5-yard loss on third-and-9 (on a questionable jet sweep) and subsequent missed 47-yard field goal. By the time the quarter had ended, Texas had scored 27 straight points.

4th quarter: Final — Texas 27, Baylor 16. The Bears heated up a bit, scoring their first touchdown on a 75-yard drive and then picking off an Ehlinger pass in UT territory to cut the Texas lead to 27-16 with seven minutes left. But the Horns’ defense stiffened on Baylor’s last-chance drive and then ran out the clock.

Horns up: Offense. Mike Yurcich, for calling five downfield shots for Ehlinger, who had 72-, 42- and 41-yard throws. … In the quality vs. quantity department, Joshua Moore had only two catches, but one was a 42-yarder down the sideline that may have been the play of the game, and the other was a short touchdown grab. … Keaontay Ingram, after back-to-back games with fumbles in the TCU and OU losses, looks like he spent his off week focusing on protecting the ball. Not only did he not fumble, but a lot of his runs we clearly was securing the ball with both hands. … Cade Brewer, in the final two minutes, chose to slide at the 5-yard line rather than try to bull forward for more yards or even a touchdown. Baylor, with no timeouts left, watched helplessly as Ehlinger kneeled down a couple of times to end it.

Horns up: Defense: Josh Thompson broke up a Baylor pass in the end zone; the Bears ended up settling for a short field goal. … Juwan Mitchell sniffed out a jet sweep on third down for a 5-yard loss, and the Bears subsequently missed a 47-yard field goal attempt. … And Chris Brown broke up a pass to R.J. Sneed on Baylor’s final gasp, a fourth-and-7 pass down by 11 with 2:19 left.

Horns down: For the second straight game, Derek Kerstetter was flagged 15 yards for an unnecessary late hit. This time, he shoved a Bears defender on the Baylor sideline. … Three Horns (Chris Brown, B.J. Foster and D’Shawn Jamison) were unable to hold on to interceptions despite getting both hands on the ball. At least they got the pass breakup stats, however. Still, missed opportunities.

Fixing the Horns. Texas coach Tom Herman, on the Monday following the four-overtime loss to Oklahoma, laid out goals of fixing the Horns’ various problems in the two weeks leading up to this game. Consider them quick fixes, or patch jobs. First impressions:

The running game: The Horns, who are leading the country in scoring by averaging nearly 50 points a game, looked content (or determined) to work the running game today. Texas finished with 147; that’s not great, but it was effective.

The offensive line: The hurtful holding and untimely false start penalties were (finally) not a problem, but Ehlinger was harried for much of the day by an aggressive Baylor defense. Lots of blitzes. Samuel Cosmi had a nice block in the first quarter to spring a nice run, but also gave up a sack in the second. Ehlinger had very nice protection on that long 72-yard pass to Tarik Black. Had lots of time to let the Bears blow their coverage.

The pass rush: Meh. Brewer was sacked just once and was hurried only twice.

Special teams: More misadventures. Ryan Bujcevski’s first effort was a 19-yard shank. The Horns later were flagged 5 yards for delay of game as Dicker lined up for a 41-yard field goal try. And for some reason, Treston Ebner — who has already returned a pair of 90-plus yard kickoffs for touchdowns this season — was given four chances to return kicks or punts. He didn’t do too much damage.

Huh?: A couple of head scratchers from Dave Aranda. With the game tied 3-3 in the second quarter, a Baylor drive stalled at Texas’ 30. But Aranda called for the punt rather than trying a 47-yard field goal. And a jet sweep was the best the Bears could come up with on third-and-9 in the third and trailing by three scores? A 5-yard loss on the play turned a 42-yard field goal try into a 47-yard try. Baylor missed it.

The real deal: All the buildup over Baylor linebacker Terrel Bernard? Legit. He was all over the place today, coming in on blitzes, altering throws and making plays. He tipped an Ehlinger pass into the end zone in the second quarter; the Horns ended up kicking a field goal. He also delivered a hard pop to Ehlinger at the end of a quarterback keeper. Bernard finished with 19 tackles, a sack, 2 tackles for loss and a pass breakup.

Ouch: Ehlinger took three hard shots — all on runs. One was to his back in the 2nd quarter, one was to the rib in the 3rd, and one was to his chest on his 3rd-quarter touchdown. The last one forced him to make a brief visit to the medical tent. He didn’t miss a snap.

Next up for Texas: A big one for the Horns — at No. 6 Oklahoma State next Saturday (3 p.m., Fox). Will Halloween in Stillwater be a trick or treat for Texas?