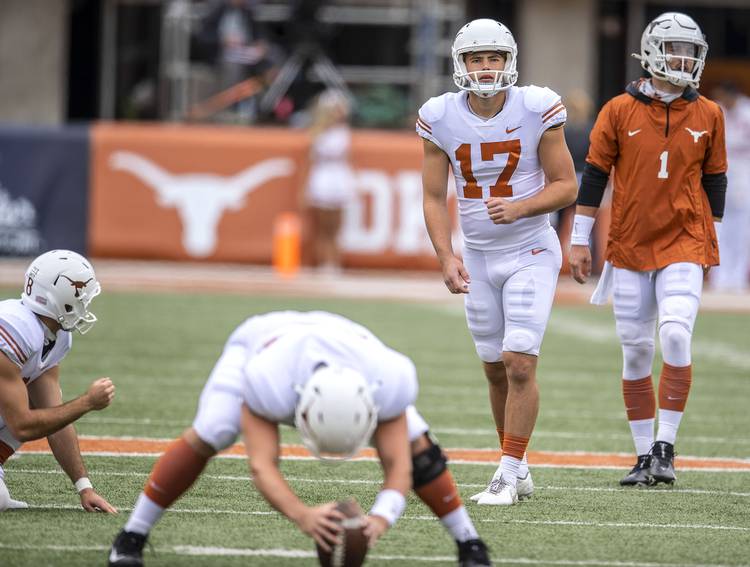 That is not a typo. This was expected to be another Big 12 shootout for the Longhorns — Texas is an 8.5-point favorite and the over/under for total points in this game is 60.5 — but so far, this game is looking like it’s sticking to form: A pair of .500 teams near the midpoint of the season, still trying to figure it all out.

Baylor, which hasn’t played since Oct. 3 and has had minimal workouts and three games canceled or postponed because of COVID-19 issues, looks sluggish.

And Texas, which had dropped two straight Big 12 disappointments before taking last week to either fix its problems with quick patch jobs, looks sluggish, too. The Horns are the No. 1-scoring team in the country, averaging about 50 points a game.

It’s basically been a battle of kickers with some timely Sam Ehlinger deep throws sprinkled in.

Who knows where we’d be if the Bears had decided field goal, not punt, when their second quarter drive stalled at UT’s 30? Or if the Bears hadn’t blown a coverage on a 72-yard Tarik Black post pattern? Or if Black, who had a couple of steps on four Baylor defenders when he hauled in the catch, had shown wide receiver’s speed on that same play, not a tight end’s?

Sam Ehlinger has been hit-and-miss but is making plays with his legs. The Horns seem content to focus on the running game. Baylor is blitzing. A lot.

After a 3-0 first quarter dud, the Horns have scored 13 unanswered points.

1. Ehlinger has taken three deep shots and has hit on two of them, one to Black on a blown coverage, one to Joshua Moore on an equally good pass and contested catch. Ehlinger is 8-of-13 for 146 yards and a touchdown. Baylor’s Charlie Brewer is 14-of-22 for 124 yards. No scores, no picks (though the Horns have come close; see below).

2. Bijan Robinson got his first career start, though he soon gave way to Keaontay Ingram. But Ehlinger has been the only real spark to the running game; he hasn’t busted anything big, but is moving the chains on his runs. Ehlinger has 10 carries for 37 yards, Ingram has 8 carries for 31 and Robinson has 4 ofr 19.

3. No receiver is popping out, though Black (1-72), Joshua Moore (2-45-1) and Brennan Eagles (3-20) are involved. Black’s big catch set up a field goal, Moore’s led to a touchdown. Jake Smith has been quiet. He has just one target. Jordan Whittington’s out with an injury.

4. All the buildup over Baylor linebacker Terrel Bernard? Legit. He’s all over the place, coming in on blitzes, altering throws and making plays. He tipped an Ehlinger pass into the end zone in the second quarter; the Horns ended up kicking a field goal. He also delivered a hard pop to Ehlinger at the end of a quarterback keeper. Bernard leads both teams with nine tackles, along with a pass breakup and half a tackle for loss.

5. Three Horns have been unable to secure an interception despite getting both hands on the ball: Chris Brown, B.J. Foster and D’Shawn Jamison.

6. Joseph Ossai (3 tackles) was shaken up late in the second quarter. Perhaps his left arm, elbow or wrist. He walked off, but looked shaky.

8. Baylor’s best players so far have been Bernard, Brewer and wide receiver R.J. Sneed, who’s been targeted eight times and has four catches for 62 yards.

9. There’s been an improvement on the penalties front. Texas has committed only two so far. Progress, folks.