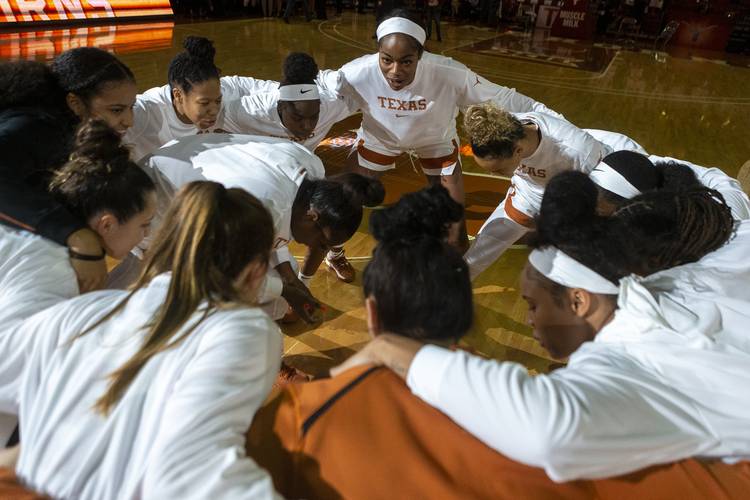 The Texas basketball team prepares to compete against UTSA in Austin on Nov. 14, 2019. [Stephen Spillman for Statesman]

On Thursday, Texas basketball coach Vic Schaefer didn’t have much of an update on junior center Lauren Ebo’s availability for the 2020-21 season.

Ebo transferred to Texas in April after spending two seasons at Penn State. Texas has appealed to the NCAA to relax a rule that would force Ebo to sit out the first season at her new school. The NCAA’s final decision has not yet been given to Texas.

“Nothing really I care to share today, but we’re in the middle of that fight,” Schaefer said during a press conference. “I’m still holding out hope on that. She’s been wonderful. What a great kid and really going to make us better whenever we can get her on the court. We’re continuing to battle that.”

Last season, Ebo averaged 5.3 points and 4.8 rebounds per game at Penn State. She was ranked by ESPN Hoopgurlz as the 17th-best post in the 2018 recruiting cycle.

Ebo transferred to Texas a year after UT sophomore guard Karisma Ortiz made the same move from Penn State. The NCAA did not allow Ortiz to immediately play following her transfer. Ortiz found out that she had to miss a year less than a week before the 2019-20 campaign tipped off.

If Ebo is available, Texas will gain some much-needed depth in the paint. Texas only has five players taller than six feet on its roster. At 6-4, Ebo is the third-tallest Longhorn. Schaefer also told reporters on Thursday that 6-5 freshman Precious Johnson has not practiced for the past month. Deyona Gaston, a 6-3 freshman, has only logged a few reps. Schaefer did not elaborate on why Gaston and Johnson have been sidelined.

Texas is set to open its season with a home game against SMU on Nov. 25. This will be the Longhorns’ first season with Schaefer, who spent the last eight years at Mississippi State.