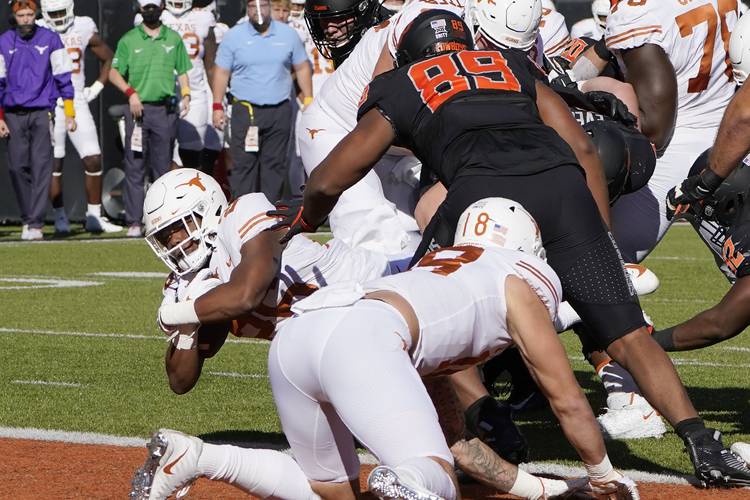 The Cowboys have produced twice as many yards as Texas. But three turnovers have led to 13 Texas points.

This win-or-else game for the Longhorns (3-2, 2-2) pits their top-ranked offense in the Big 12 against the conference’s top-ranked defense. So far, it’s been the Texas defense that has made some big plays and the Texas offense that’s struggling on third downs, has been unable to sustain long drives and hasn’t yet gotten Sam Ehlinger going. Meanwhile, redshirt freshman Spencer Sanders is looking like that next solid Oklahoma State quarterback, though he has erred thrice.

Chuba Hubbard, who led the country in rushing last year, and Tylan Wallace, the 2018 Biletnikoff Award finalist who had a monster game against Texas two years ago, have had their moments, but neither are dominating the maligned Longhorns rush defense and secondary.

Joshua Moore, maybe Texas’ most dangerous receiver, hasn’t had a reception and has been targeted just once.

1. In today’s battle of the quarterbacks, OSU’s Sanders won the first half both statistically and game-wise.

Sanders is 14 of 20 for 232 yards and three touchdowns. He’s made two costly mistakes (a fumbled handoff, an interception and a second fumble) but also has thrown for three scores and is making plays with his legs; his 35-yard scramble in the second quarter is the second-longest run against Texas this season. That’s supposed to be Ehlinger’s role, but so far he’s been mostly bottled up (8 of 15 for 100 yards and a TD, and four runs for minus-5 yards).

2. Bijan Robinson got the start for the second straight week. His first two carries: a 4-yard loss on the first play of the game, followed by a 24-yard burst full of spins, jukes and a broken tackle on the second play. The freshman is leading the team with 47 yards on seven carries.

3. Joseph Ossai, bad shoulder and all, is playing. He has notched his second and third sacks of the season in the first quarter and also knocked the ball loose from Sanders on his third one. Ta’Quon Graham scooped it up and produced maybe Texas’ best run of the day, a weaving 33-yard return to OSU’s 20.

4. Jacoby Jones has also had a big half. He recovered the Hubbard fumble at OSU’s 15, which set up UT’s first score. He also has a sack.

5. The back end of the defense is making plays, too. Jalen Green picked off a Sanders pass in the second quarter and returned it 41 yards all the way to OSU’s 8-yard line. He was shaken up on the Cowboys’ next drive, though.

6. Brennan Eagles’ 41-yard touchdown catch was the third-longest scoring play of the season so far for the Longhorns.

7. The Horns are only 1 of 7 on third downs, which have been an issue all season. The turnovers are saving the Horns. The average third-down yardage needed has been 6 yards:

On the other side of the third-down fence, three UT penalties on third down have extended OSU drives.