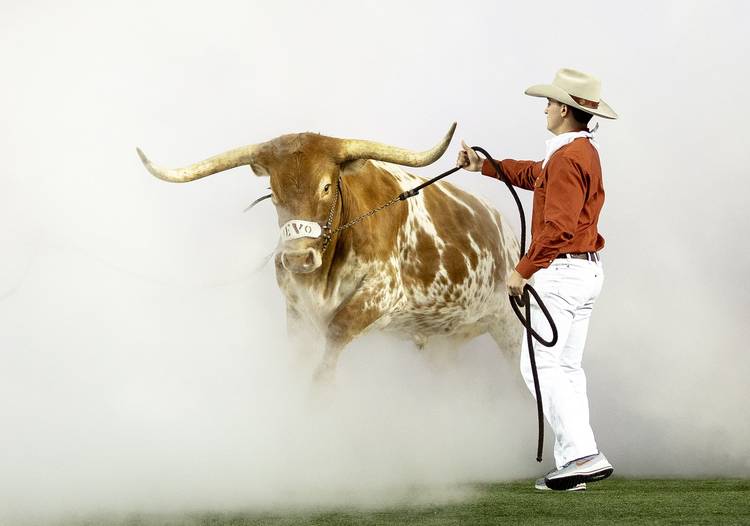 Bevo XV runs onto the field from a tunnel as Texas Silver Spur guides the bull before an NCAA college football game against Iowa State in Austin, Texas, on Saturday, Nov. 17, 2018. [NICK WAGNER/AMERICAN-STATESMAN]

Coming off a 27-16 win over Baylor last week, the Longhorns are on the road for a Halloween matchup with the highest ranked team in the conference. Texas (3-2, 2-2 in the Big 12) will face No. 6 Oklahoma State (4-0, 3-0) for the 35th overall meeting between the two programs. Texas owns a 25-9 advantage in the series and won 36-30 last year but the Cowboys have won seven of the last 10 meetings. For live updates, photos and analysis from the American-Statesman’s Brian Davis, Danny Davis, Kirk Bohls and Cedric Golden, checkout our live blog:

Saturday afternoon in Stillwater against the undefeated Cowboys is something of a make-or-break moment for the 2020 Horns. https://t.co/WnTP32TXQD pic.twitter.com/N6oDf7tPn6

Watching the Horns warm up. WR Brenden Schooler is not dressed out. WR Jordan Whittington was not expected to play, so he's not out there.

Pokes are going with all black uniforms tonight vs. Horns' Icy Whites. BPS place will have a different vibe without a full paddle-stomping house.

Horns headed back to the locker room after pre-game. pic.twitter.com/tlQWpn9IYl

After the Longhorns punted on the opening drive, the Cowboys took advantage by scoring on its first drive.

An OKST fumble set up the equalizing score for Texas.

Chuba wasn't expecting the ball there. Jacoby Jones was right there for the recovery. #Horns have to cash.

The Cowboys with responded later in the quarter to retake the lead.

A 14-7 score after the first quarter of a game being played on Halloween? This one may end up being a… Thriller. #HookEm pic.twitter.com/NVXnaSYPSi

A deep bomb on third down from Sam Ehlinger tied the game at 14 in the second quarter.

Touchdown Texas. Ehlinger with a deep ball to Eagles. That's a 41-yard bomb.

An interception set up a field goal for Texas.

OSU all over a misdirection play by Texas, where Brewer caught it and was spilled at the 3. Dicker the Kicker gives Texas a 17-14 lead with an easy 20-yarder. 10:56 2Q.

The Cowboys regained the lead after a big run by Sanders.

Touchdown OSU. Sanders with an easy throw out of the backfield to Hubbard. 5-yard score.

How’s this for a trick? Defense is keeping Texas in it at Stillwater; OSU leads at halftime, 24-20 https://t.co/xHmXuK2Q1v

The field goal by the Cowboys sent the game into overtime, tied at 34. The Longhorns struck first in overtime.

The score was enough for the win as the Longhorns upset No. 6 Oklahoma State in overtime, 41-34.

Texas players congratulating the few fans that are here. pic.twitter.com/ujwkaxuy8X

Joseph Ossai played the game of his life today. Texas fans will never forget this performance.

A fourth-down sack by Joseph Ossai seals it for Texas. It took an overtime session, but UT has recorded a 41-34 win at undefeated Oklahoma State. The Longhorns (4-2; 3-2 Big 12) save their season with a little bit of… Hocus Pocus. #HookEm pic.twitter.com/kaOpoinn93