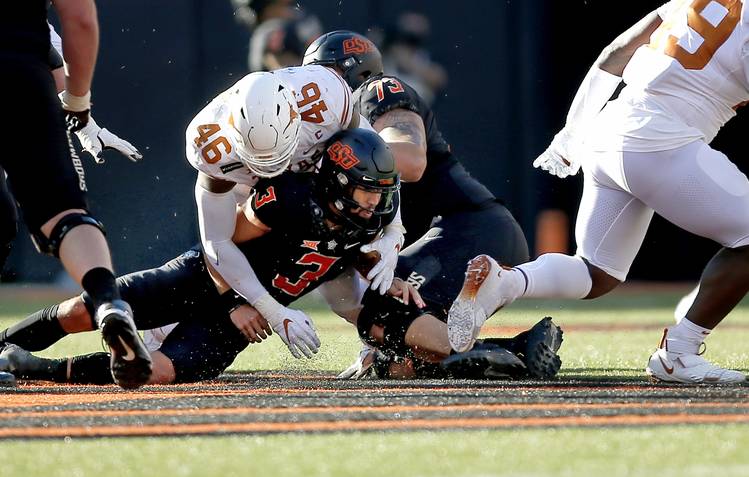 Another week, another overtime.

And a huge win for the Texas Longhorns.

Texas played its third overtime game this season, and fittingly, the game ended with a Joseph Ossai sack on fourth down, leading the Horns to a 41-34 win over sixth-ranked Oklahoma State in Stillwater.

Joshua Moore — Texas’ leading receiver and top offensive threat this side of Sam Ehlinger — caught only one pass today. But it was a big one: A touchdown on the first overtime drive that ended up being the game winner. It all came down to a fourth-down try for the Cowboys to tie it up. On fourth-and-8 from the 12, the Horns blitzed and Ossai chased down Spencer Sanders for UT’s fifth sack of the game.

Ehlinger floated back and forth from cool to cold for three quarters, but turned on that switch in the fourth. The defense kept Texas in this one, and when it started to tire in the fourth, Ehlinger started making plays. Two key fourth-down conversions in the fourth quarter culminated the comeback and then the Horns won it in overtime. Oklahoma State committed four turnovers, three of them that Texas converted into 21 points. Ehlinger was off, the running game lost Keaontay Ingram, Moore was the invisible man for four quarters and even Cameron Dicker missed an extra point. But those five sacks were big and containing Chuba Hubbard for the second straight year was even bigger.

Back in August, we figured this game might determine who’d face Oklahoma again for the Big 12 championship game in December. That technically still may be true. A loss would have knocked the Horns out of realistic contention. Instead, Texas has now won two straight, the Horns recorded their first win over a top-10 team since 2012 and now face a four-game closing stretch of winnable matchups: West Virginia at home, at Kansas, Iowa State at home and then at Kansas State. How does 8-2 sound?

1st quarter: Oklahoma State 14, Texas 7. The Cowboys got the first score — duh, a Tylan Wallace touchdown catch  — but the Longhorns got the first big break when a Spencer Sanders RPO fumbled handoff to Chuba Hubbard was recovered by Jacoby Jones at OSU’s 15. It setup Keaontay Ingram’s first touchdown of the season. Ingram limped back to the sideline, however, and didn’t return. Texas got to Sanders three times, including a pair of sacks by Joseph Ossai.

2nd quarter: Halftime — Oklahoma State 24, Texas 20. The defense handed the offense another great situation when Jalen Green picked off a Sanders pass and returned it 41 yards to OSU’s 8-yard line. Cameron Dicker booted a short field goal. Brennan Eagles’ 41-yard touchdown catch was the third-longest scoring play of the season for Texas. It was a quarter of runs, with the Horns putting up 10 unanswered points and the Cowboys putting up 10 unanswered points. Sanders’ third turnover of the game led to more Texas points when Ta’Quon Graham recovered a fumble more than 30 yards to OSU’s 20-yard line.

3rd quarter: Oklahoma State 31, Texas 26. Wallace was already having a big day, but things got complicated when Texas cornerback Josh Thompson, who had spent most of the day covering him, headed to the locker room in the third quarter after a hard tackle. Wallace had two more catches on that drive alone, including his second touchdown of the game. D’Shawn Jamison’s electric kickoff return was a perfect-timing answer, but his subsequent 15-yard unsportsmanlike conduct penalty led to missed extra-point kick from 35 yards out.

4th quarter: End of regulation — Texas 34, Oklahoma State 34. Texas put itself in great position when Ehlinger converted two fourth downs on the go-ahead drive; OSU’s next drive stalled, but the Horns weren’t able to run out the clock. Sanders made a couple of key connections downfield and the Cowboys sent it to overtime on a field goal with 5 seconds left.

Overtime: Final — Texas 41, Oklahoma State 34. Joshua Moore’s only catch of the game came at the perfect time. His overtime score made it a 41-34 game and the Cowboys, needing a touchdown, couldn’t recover from an ineligible man downfield penalty that took away a Jelani Woods touchdown grab. On fourth-and-8 from the 12, Sanders was flushed to the left on a Texas blitz and Ossai sacked him for the third time to end the game.

Horns up: Offense. Bijan Robinson got his second start of the season and rushed for 59 yards, which led the team. … Roschon Johnson had a bounce-back day, with nine runs for 49 yards, including a 29-yard scamper in the third quarter. … Jake Smith (7-70-1) led the team in receiving, but his biggest impact came on two clutch fourth-down catches in the fourth quarter, the second being the winning score.

Horns up: Defense: Lots of defensive game balls to pass around. Jack end Joseph Ossai had his best game of the season and one of the best of his career — 12 tackles, 3 sacks, a forced fumble that set up a field goal and a recovered fumble. Oh, and he had six tackles for loss, too. … DE Ta’Quon Graham had a sack, 3.5 tackles for loss and a key fumble recovery.

Horns down: Derek Kerstetter avoided the costly 15-yard unsportsmanlike conduct penalties this week, but for the third straight game he stood out because of a mistake. This time it was a fumbled snap; it appeared that he thought Ehlinger was lined up right behind him, not back in the shotgun. The Horns recovered the fumbled snap, but the play went for a 2-yard loss on third-and-1. … Jamison’s unsportsmanlike conduct penalty for shushing the crowd after his big kick return set Cameron Dicker back 15 yards on the extra-point try, from 35 yards out. The kick sailed wide.

Third-down horrors: Remember when Texas was one of the best teams in the country on third-down conversions, back in 2018? Or when the Horns again were solid on third downs in 2019? Saturday was so 2020. The Horns were just 2-of-15 on third downs.

The anatomy of Texas’ third-down woes:

Third-and-10: Incomplete to Al’Vonte Woodard over the middle. (Joshua Moore, by the way, wasn’t even on the field.)

Third-and-13: Incomplete to Eagles, but a defensive pass interference call led to a first down.

Third-and-8: Incomplete to Moore, but a pass interference the Horns new life on their first overtime drive with a first down at the 8.

Ehlinger vs. Sanders: Texas’ senior quarterback was outshined by Oklahoma State’s redshirt freshman on the stat sheet, but it was Ehlinger who got the W.

Wallace, the sequel: Tylan Wallace had a huge game — 11 catches for 187 yards and 2 TDs. It was almost as huge as his 2018 performance in Stillwater against the Horns, when he had 10 grabs for 222 yards and a pair of scores. He was a Biletnikoff Award finalist that year. He looked worthy of winning it on Saturday. He was defended by Josh Thompson for three quarters, but Thompson exited with an injury. Jalen Green was tried at first, but after giving up a touchdown catch he was replaced by D’Shawn Jamison, who came out on the wrong end for the most part but did have a nice pass breakup in the fourth.

Hubbard slowed down: Chuba Hubbard, who led the country in rushing last year, had 25 carries for 72 yards. He didn’t score and averaged 2.9 yards a carry.