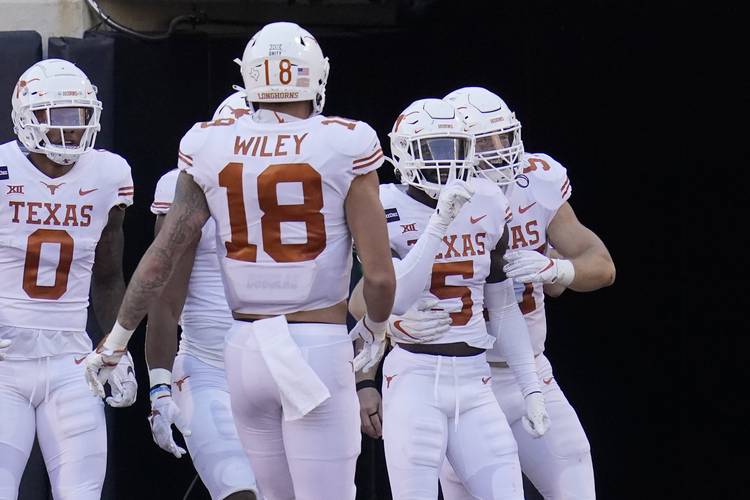 The honors keep rolling in for Texas defensive end Joseph Ossai after his eye-popping performance against Oklahoma State, and D’Shawn Jamison is getting some recognition, too.

The league office also announced that Jamison was named the Big 12 special teams player of the week for his 100-yard kickoff return for a touchdown.

Quarterback Sam Ehlinger told reporters Monday about a phone conversation he had with Ossai after the Oklahoma game in October. Ossai was upset that he didn’t make game-changing plays against the Sooners.

Ossai closed the Oklahoma State victory with a fourth-down sack of Spencer Sanders.

“You can say what you want about our team, but our guys, they don’t stop fighting,” Ossai said.

Joseph Ossai recorded 1️⃣2️⃣ tackles, 6️⃣ tackles for loss, 3️⃣ sacks, forced 1️⃣ fumble and recovered 1️⃣, all of which were career highs, in @TexasFootball’s victory over No. 6 Oklahoma State. @joseph_ossai is the #Big12FB Defensive Player of the Week. pic.twitter.com/VPn1Ms6Ajd

D’Shawn Jamison logged a career-long 💯-yard kickoff return for a touchdown in @TexasFootball's win over Oklahoma State. It was his 3️⃣rd career kick return for a TD, which is tied for the 2️⃣nd-most in school history.@D_JAMISON5 is the #Big12FB Special Teams Player of the Week. pic.twitter.com/AnqvaUsu2i