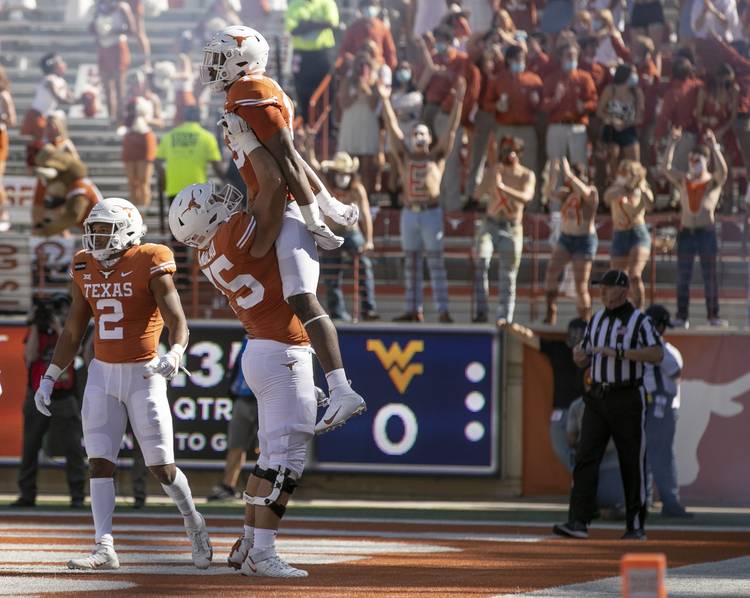 At this point of the season, with a pair of Big 12 losses already on the ledger, every game is a must-win game for Texas. The 22nd-ranked Longhorns produced their second straight defensive gem, shutting down West Virginia’s running game, forcing the Mountaineers into field goals and taking advantage of being on the receiving end of three big referee decisions for a 17-13 win at Royal-Memorial Stadium.

It wasn’t a big day for Sam Ehlinger. There was no one individual Longhorn who even stood out statistically. This was a team win: The offense misfired but had a moment or two, the defense was tough all day, and the punting game was actually a strength.

Three big decisions went the Horns’ way: A West Virginia touchdown catch that would have tied it 17-17 in the third quarter was overturned on replay; a recovered fumble in the second half that would’ve given the Mountaineers, trailing 17-13, the ball at Texas’ 37 was over-ruled on another replay; and a critical fourth-and-1 pass into the end zone with 4:48 left was broken up by Chris Brown on a play where there was definitely contact, but nothing was called. The defense bent but did not break, forcing West Virginia into field goals or failed fourth downs (the Mountaineers were 0-for-3 on fourth downs).

Getting to the Big 12 championship game remains a possibility. The Longhorns keep rolling up momentum heading into the home stretch against Kansas, Iowa State and Kansas State.

1st quarter: Texas 7, West Virginia 7. Bijan Robinson got the start for the third straight game, and burst for a 54-yard run on Texas’ first play. It led to Sam Ehlinger’s 89th career touchdown pass, which moved him past Oklahoma Heisman winner Sam Bradford for ninth place all-time on the Big 12 career list. The pass was caught by Brennan Eagles, who was UT’s most dynamic receiver in the quarter: three targets, two catches, one touchdown and one drawn pass interference penalty. The quarter included a failed fourth-and-1 try for the Horns, another tackle for loss by Joseph Ossai and one significant WVU drive that evened the score. Note: DT Keondre Coburn went down with 3:20 left. He limped off without assistance with what looked like an ankle injury and missed the rest of the game.

2nd quarter: Halftime — Texas 10, West Virginia 7. This game looked like it would be a shootout in the first quarter, with the two quick scoring drives to open the game, but became a defensive grind in the second. The Horns had their chances, getting the ball at their own 47 and West Virginia’s 49 to open drives, but got no points from either. And Dicker missed from 48 yards out at the end of the half.

3rd quarter: Texas 17, West Virginia 13. The Mountaineers came out throwing in the second half, as quarterback Jarret Doege directed two straight scoring drives to open the third quarter. West Virginia threw it on five of their first seven plays of the third and moved the ball efficiently both possessions — but those two strong opening drives yielded just a pair of field goals. The Horns scored on Ehlinger’s second touchdown pass of the game to go up 17-10, but the wind went out of the Mountaineers’ sails when Winston Wright’s juggling touchdown catch at the back of the end zone was reviewed and overturned, and a DeMarvion Overshown blitz on third-and-goal from the 8 on the very next play resulted in a sack.

4th quarter: Final — Texas 17, West Virginia 13. So many missed chances for the Mountaineers in the second half. There were the two nice drives that stalled in the third quarter, forcing field goals, and then trailing 17-13 with 11:30 left in the game, they went for it on fourth-and-1 at Texas’ 16. B.J. Foster broke up a touchdown catch in the end zone. And Chris Brown broke up another touchdown in the closing minutes on fourth-and-1; it ended up being West Virginia’s last gasp.

Horns up: Offense. Bijan Robinson got his third straight start and it took him all of one play to make a splash: a 54-yard run sprung by blocks from Junior Angilau and Cade Brewer. It set up Texas’ first touchdown. … Ehlinger’s touchdown pass to Eagles was the 89th of his career; he passed Oklahoma Heisman winner Sam Bradford for ninth place on the Big 12’s career TD passes list on the throw.

Horns up: Defense: DeMarvion Overshown’s sack on a third-and-goal blitz in the third quarter maybe saved four points in the third quarter; West Virginia, down 17-10, had to settle for the field goal. … Josh Thompson had a big stop on third-and-8 from Texas’ 15 with 4:48 left, stopping Leddie Brown one yard short of the first down, which set up Chris Brown’s even bigger fourth-down pass breakup in the end zone. And B.J. Foster broke up a touchdown catch earlier in the fourth, on another fourth-and-1 play.

Horns down: DT Keondre Coburn suffered an apparent ankle injury with 3:20 left in the first quarter and did not return. … For the second straight game, Joshua Moore went missing in action. Texas’ leading receiver on the season didn’t record his first catch in Stillwater until his game-winning touchdown in overtime. Today he didn’t get any targets in the first half, then was ruled questionable to return early in the fourth quarter with a shoulder injury. He did pounce on a loose ball in the third quarter to keep a drive alive. … Brenden Schooler was unable to hold on to a catch on a downfield shot with 9:40 left in the game and Texas up 17-13. And on the very next play, Tarik Block dropped a sure-fire downfield pass that would’ve set the Horns up at WVU’s 25.

On second thought: Texas came out on the winning end of two critical reviews that overturned damaging plays. Both in the third quarter. The first one came with Texas leading 17-10, when WVU’s Winston Wright caught a juggling touchdown pass in the back of the end zone. It was ruled that he lost possession on his way to the ground, however. The Mountaineers went from a 17-17 tie to a 17-13 deficit after settling for a field goal. And the second big overturned call was a ruled fumble on what was originally ruled a backward pass to Kai Money; but officials called that back too. West Virginia, still down 17-13, would have had the ball at Texas’ 37.

About that defense: Another strong showing for the Texas D. But the Horns weren’t able to pressure Jarret Doege. They had only two sacks and no quarterback hurries. Last week, Texas improved from 88th to 59th nationally in sacks by getting five sacks. And how did Joseph Ossai, who was this week’s Big 12 defensive player of the week, follow up his big day in Stillwater? Three tackles, one for loss.

Next up for Texas: The Horns are off next week. No TV or kickoff time has been announced yet for the Nov. 21 game at Kansas. Plan for an afternoon kickoff, most likely.