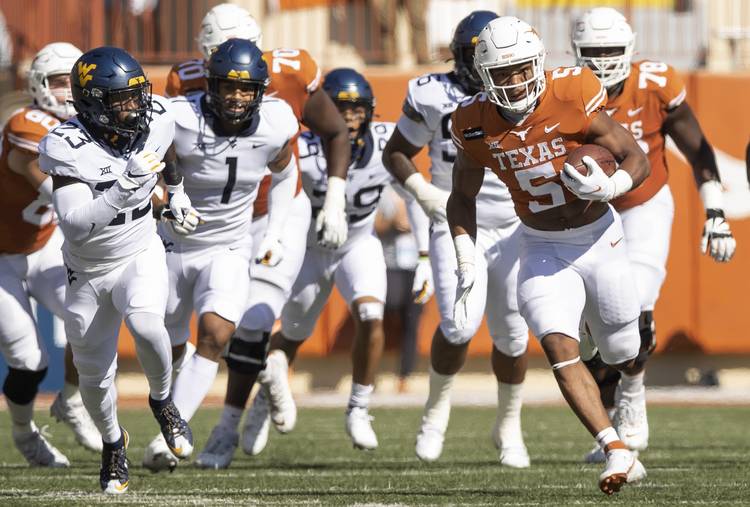 It’s halftime at Royal-Memorial Stadium, and No. 22 Texas is leading West Virginia 10-7.

This one looked like it was going to be a shootout — Texas zipped its way downfield for an opening-drive touchdown, then West Virginia answered with an efficient touchdown drive of its own — but then developed into a strong defensive effort from both teams, turning into a game highlighted by plays coming from the defensive line and punt plays.

Five-star start: Bijan Robinson got his third straight start. It took him all of one play to make a splash: A 54-yard run sprung by blocks from Junior Angilau and Cade Brewer.

Quick start: Texas got off to a fast start: a seven-play, 75-yard drive that took only 2:25 to complete. The Horns converted two third-and-7s, both completions to Brennan Eagles, the second one for Ehlinger’s 21st touchdown pass of the season.

Ossai watch: What’s Joseph Ossai doing for an encore to his conference defensive player of the week performance against Oklahoma State? He produced his 13th tackle for loss on the season on a third-and-9 and has two tackles so far.

WVU’s top plays: Somehow, WR Isaiah Esdale ended up with the ball on a third-and-15 pass that D’Shawn Jamison was all over on coverage; it went for 28 yards. … Winston Wright beat Caden Sterns for a 38-yard catch in the first quarter. … Tony Fields II stuffed Robinson just short of a first down on a fourth-and-1 play at WVU’s 39. That play probably saved points.

Horns up: Texas’ first punt was perfect — a 40-yard floater that Josh Thompson saved at the goal line; it was downed at the 3. And the two connected for an even better effort in the second quarter, a punt that bounced at the 10 and was secured by Thompson at the 1. … Ehlinger’s best throw so far: a perfectly-placed throw to Tarik Black, who had a defender draped on him and holding his jersey, for a 21-yard gain over the middle at the end of the first quarter. … Robinson’s 54-yard run to open the game was the longest run from scrimmage for the Horns this season. … DE Moro Ojomo had a sack in the second quarter on a bull rush. … Anthony Cook sniffed out a pass to Leddie Brown on third-and-3 from UT’s 35-yard line in the second quarter, for a 2-yard loss. It led to a fourth-and-5 try at the 37, which the Mountaineers could not convert. … DT T’Vondre Sweat batted down that fourth-down try at the line of scrimmage.

Horns down: DT Keondre Coburn went down with 3:20 left in the first quarter. He limped off without assistance with what looked like an ankle injury. But that would be a big loss, depending on the injury. He headed into the locker room and has not returned to the game. … DB Chris Adimora was shaken up with 8 minutes left in the half as well.

Texcetera: Freshman DT Alfred Collins nearly came up with his first career interception, on West Virginia’s first drive. Had both hands on it, but couldn’t hold on. …  Ehlinger’s touchdown pass to Eagles was the 89th of his career; he passed Oklahoma Heisman winner Sam Bradford for ninth place on the Big 12’s career TD passes list on the throw. … Texas is winning special teams. There was the Bujcevski punt downed at the 3 in the first quarter, a WVU muffed punt return that the Mountaineers were able to recover in the second, and another impressive UT punt in the second that was downed (by Thompson again) at the 1. …

The Mountaineers will get the ball to start the second half.