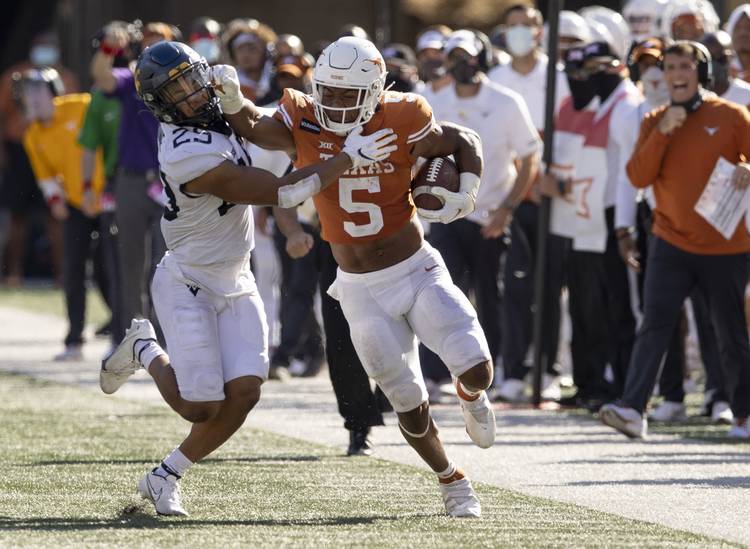 When it handed out its weekly award on Monday, the Big 12 did not forget about Texas freshman running back Bijan Robinson.

Robinson has been named the Big 12’s newcomer of the week. A first-time recipient of this award, Robinson was honored for his efforts in Saturday’s 17-13 win over West Virginia.

With Keaontay Ingram sidelined with an ankle injury, Robinson starred against the Big 12’s top rushing defense. Robinson’s 12 carries turned into 113 yards. He picked up 54 of those yards on the game’s first snap.  Robinson also had a 35-yard reception that set up two game-ending kneel downs.

Bijan Robinson carried the ball 1️⃣2️⃣ times for 1️⃣1️⃣3️⃣ yards against WVU – recording the first 💯-yard game of his true FR season with @TexasFootball. His 1️⃣1️⃣3️⃣ yards are the most rushing yards by a Longhorn this season. @Bijan5Robinson is the #Big12FB Newcomer of the Week. pic.twitter.com/r6oGP2yxDC

Robinson is responsible for one of UT’s two 100-yard performances this season. (Quarterback Sam Ehlinger ran for 112 yards against Oklahoma last month, but 43 of those yards were recorded over the four overtime periods.) Robinson’s 294 rushing yards lead all of UT’s running backs. The five-star freshman is still looking for his first collegiate touchdown, but he is averaging 5.8 yards per carry.