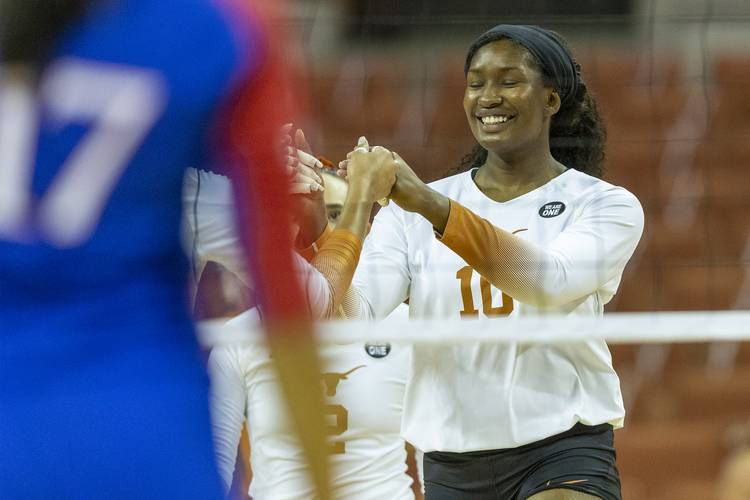 Texas middle blocker Brionne Butler (10) prepares to compete against Kansas at the Erwin Center on Oct. 1, 2020. [Stephen Spillman for Statesman]

This marks the second time that Butler has won this award this season. She was honored this week alongside Baylor outside hitter Yossiana Pressley (offensive) and Kansas State’s Jayden Nembhard (newcomer).

🏐 Pressley: put down 61 kills in two matches at No. 1 Texas while accounting for 65 total points
🏐 Butler: finished with 17 blocks and 21 kills and hit a team-high .419
🏐 Nembhard: paced the Wildcats offense with 3.14 kills per set pic.twitter.com/CKDp0CEEoZ

During Texas’ two five-set wins over Baylor last week, Butler blocked 17 shots. One of those blocks was a key rejection of a Pressley attempt during the fifth set of Thursday’s triumph. Butler tied a career high with her 11 blocks on Friday.

For the season, Butler is averaging 1.44 blocks per set. That leads the Big 12.

Ranked No. 1 in the AVCA’s fall poll, Texas (12-0) will play matches at West Virginia (7-5) on Thursday and Friday. This will be the 17th and 18th meetings between Texas and West Virginia. The Mountaineers are looking for their first win in this series.

Texas DT Keondre Coburn’s ankle injury not as bad as feared, could play vs. Kansas