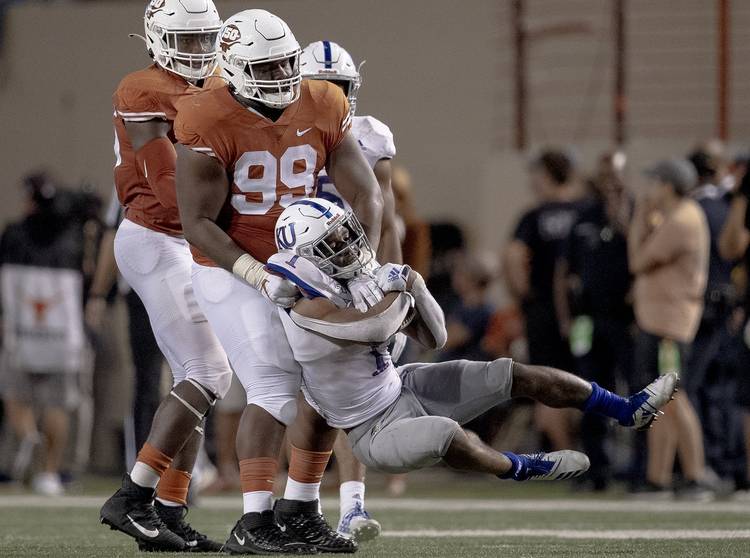 Coach Tom Herman said that his defensive anchor had just “a mild high ankle sprain, as those do go,” during an interview with UT play-by-play voice Craig Way on 104.9 The Horn.

Coburn appeared to get rolled up with other linemen during the first half of the West Virginia game and did not return. He came back to the sideline wearing a protective boot while in street clothes.

“He’ll be in a boot for a couple more days,” Herman said. Trainers hope that Coburn can return to practice on Sunday when UT starts Kansas week preparations. If not Sunday, then Tuesday at the latest, the coach said.

“Literally just running down there to be a safety on the punt coverage team, landed wrong on the turf and the knee buckled on him,” Herman said.

Herman said receiver Jordan Whittington expects to return to practice Sunday or Tuesday, meaning he could play against the winless Jayhawks. Running back Keaontay Ingram (high ankle sprain) is likely to miss another game, though.

As for Sam Ehlinger’s health status, Herman said his quarterback did suffer a calf injury two weeks ago against Baylor. “But he came into the West Virginia game feeling as good as he’s felt the last few weeks,” Herman said.