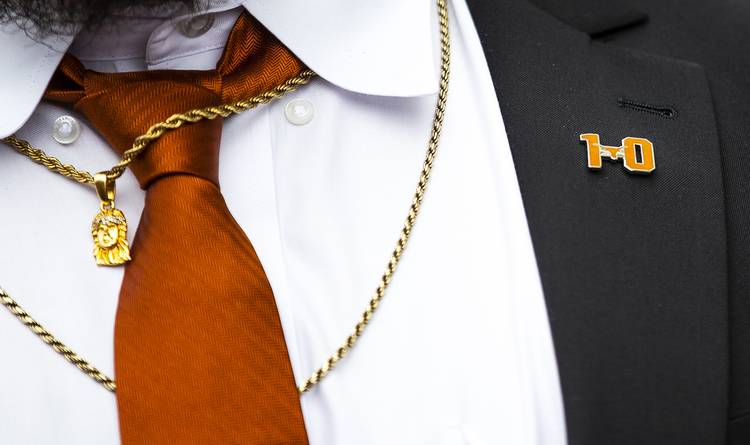 Former Texas offensive lineman Patrick Vahe wears a "1-0" lapel pin before the 2018 game against TCU. He's no longer on the team, but that "take each game one at a time" mentality is especially appropriate for Texas right now: the Horns control their own Big 12 destiny with three games left. (Nick Wagner/American-Statesman file photo)

Talk about a tale of two weeks. Last Monday, Herman shot back at questions over his job security and recent troubles with recruiting — and that was when he was prepping for winless Kansas. Today, with 15th-ranked Iowa State coming to town with, well, the season on the line in terms of even getting the chance to play for a conference championship on the line, Herman came off calm, cool and focused on Friday.

“We’re still a work in progress,” he said. “We haven’t played our best game yet.”

Injury updates: Pretty positive news on injuries. Keaontay Ingram, who’s missed the last couple of games, is considered questionable for Friday. But keep in mind that Bijan Robinson has started three straight games and is coming off his first career 100-yard game in the win over West Virginia. … Joshua Moore, who’s still leading the team in receiving despite making only one reception in the last two games, is probable. Same with tight end Jared Wiley, who hurt his shoulder two weeks ago in practice.

State of the Horns: Well-rested. Pretty healthy. And, from the way Herman sounded, focused. “Nobody in this program has ever gone 20 straight days in the regular season without playing a game. A lot of opportunities built in there as well, though, to get guys rested, to get guys healthy and on a short week hopefully to get an extra day or two of preparation time.”

Texas is 4-1 after bye weeks under Herman. He was asked later to explain why, but he couldn’t really. “This isn’t a normal bye week. This is 20 days without playing a game. The most important line you walk is you got to get the full speed of reps or else you’re going to be extremely rusty having not played anyone other than your scout team for 20 days. That’s not real smart, but you’ve also got to be smart in terms of the health of your team. The fatigue factor — our guys’ bodies I think are wearing down a little bit more this year normal years for obvious reasons.”

… and where the Horns are at, big picture: They’re embroiled in a race to Arlington. Oklahoma, Oklahoma State, Iowa State and Texas will be the ones to sort out the two teams that will meet for the Big 12 championship game on Dec. 19. The Horns’ path isn’t easy, but at least is easy to see: Beat Iowa State, then beat Kansas State, then beat Kansas and they’re in. Lose one of those, it gets more complicated. Lose two, and stick a fork in ’em.

“They know it,” Herman said. “Every game from this point forward is the biggest game of the year — for us. We’re one of the few teams in America left that still control their own destiny in terms of the ability to reach their conference championship. But we know that you can’t win ’em all till you win the first one. And that’s priority No. 1. There is no talk about what might be, what could be, this, that and the other. Our players know we control our own destiny, but in order to do that, we’ve got to go 1-0 each week.”

So long, seniors: Friday’s game will/should be the final game at Royal-Memorial Stadium for a handful of seniors and probably-headed-to-the-NFL draft juniors. That list includes Sam Ehlinger, Ta’Quon Graham, Derek Kerstetter, Denzel Okafor and Chris Brown … and probably Samuel Cosmi and Joseph Ossai, too. The NCAA has given college football a freebie this year in terms of eligibility, meaning they’ll all be able to play again next season without losing a year of eligibility — if they want to.

We figure they’ll all say thanks, but no thanks.

Herman was asked about what Ehlinger has meant to the program. The former Westlake star committed to Charlie Strong but signed with Herman, and has been the face of the program for the past three years.

“Wow,” Herman began, looking for the words. “Well, I think his legacy with our fans and everybody associated with college football, he’s going to go down as one of the greatest quarterbacks to ever to put on the burnt orange and white, not just from a statistical standpoint — which the numbers bear that out very plainly — but all the things that he has done in terms of the stabilization of this program, from the time that both him and I arrived and the state of the program when we got here compared to now. And he deserves a lot of credit for that.”

Ehlinger is No. 2 on the school’s all-time list in career touchdowns, trailing Colt McCoy’s record 132 by 10, at 122. His 25 career wins as the starter are tied for sixth with James Brown and Peter Gardere and he could pull into a tie for fourth with Chris Simms and Marty Akins with a win on Friday. Depending on whether Texas makes the Big 12 title game, he has four or five games left; he’s three away  from tying Bobby Layne for third place and five off Vince Young’s 30, which is second place. Ehlinger is tied with Major Applewhite with seven game-winning drives, tops in UT history, and has notched a Sugar Bowl win over Georgia, a regular-season win over Oklahoma and one trip to the Big 12 championship game.

Dicker the Punter: Don’t forget that Ryan Bujcevski is out for the rest of the season with a torn ACL, so Cameron Dicker will take over punting duties. He also punted in high school.

Last week, Herman said the Horns were still trying to figure out who’ll handle holding duties for Dicker field goals and extra-points — that was a Bujcevski role. It didn’t come up in today’s presser.

Texcetera:  Herman was asked where he felt Texas has made the most progress on offense, and where his biggest offensive concern is. He pointed to the running game and run-blocking from the offensive line as the positives. Biggest concern? “The consistency on the perimeter” at wide receiver, as players have bounced in and out of the lineup with injury and consistency issues. … What Thanksgiving will look like this week for the Horns: “A normal Thanksgiving? I haven’t had a normal one since I was 17 years old,” Herman said. Most years, with a Friday game the day after Thanksgiving, UT would practice early Wednesday morning, then allow the local-area (within driving distance, including Austin, San Antonio, Dallas and Houston) to go home Wednesday afternoon for a “makeshift” early Thanksgiving with their families, and then on Thursday, back at the hotel where the team would be staying, there’d be a team Thanksgiving meal — or feast, as Herman put it (“turkey, ham, mashed potatoes, gravy, the whole nine”). This year, not so much. “But this year we can’t,” he said. The team will be at a hotel but won’t eat a Thanksgiving meal together. So, from feast to least, if you will. “These kids will be grabbing their dinner and heading up to their hotel room to eat in isolation. It sucks, and there’s no better adjective for it, and it’s not the way Thanksgiving’s meant to be spent, but it’s also when you sign up to play college football and coach college football, it’s kind of the understanding: Your Thanksgivings and Christmases are not gonna be normal, like anybody else’s, and that’s OK. We’ve all kind of come to the understanding that’s it’s worth it to play and coach in this great game and to be around each other.”

Per the Longhorn Network today, the number crunchers over at ESPN have figured out just how important this game is:

If Texas beats Iowa State, the Longhorns’ chances of making it to the Big 12 championship game are 77%.

If Texas loses, that percentage drops to 2%.