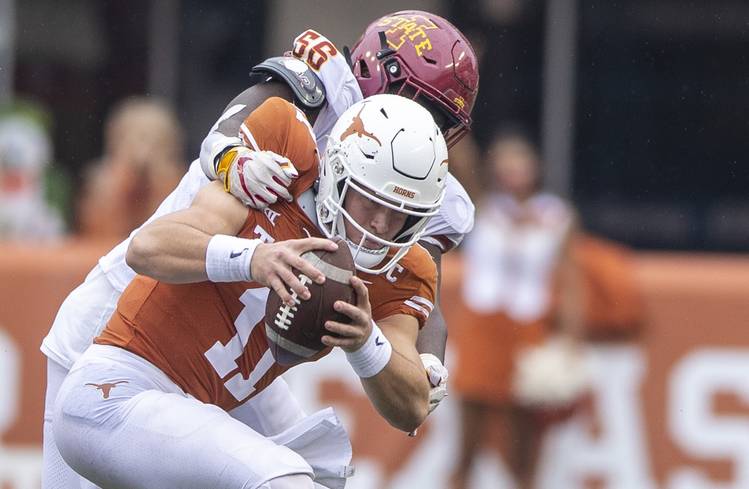 It’s all over at Royal-Memorial Stadium. And when we say over, we mean Texas’ chances at playing for a Big 12 championship this season.

It’s all about the math. With the Big 12 title game coming down to four teams — Iowa State, Oklahoma, Texas and Oklahoma State — the number crunchers over at ESPN figured out the implications of this matchup in regards to making it to Arlington:

If Texas won, the Horns would have a 78% chance of making it to the title game.

If Texas lost, the Horns would have a 1% chance.

And the way the Horns lost was a dagger, too: After stifling Breece Hall, the nation’s leading rusher, for virtually the entire game, the Horns’ defense took Iowa State’s game-winning drive off, giving up a big gainer by Hall and a couple of passes to tight ends and finally taking the lead — for only the first time in the game. Hall’s 3-yard scoring run was the difference.

Then Sam Ehlinger, the architect of plenty of fourth-quarter heroics in his Longhorns career, couldn’t do it again in his final home game. Texas, trailing by a field goal with 1:25 left, converted a key third-and-long to keep the drive alive, and found itself at Iowa State’s 43-yard line with 27 seconds left and a time out left. Ehlinger scampered xx yards for a first down to the 36, with 19 second left.

Ehlinger’s pass to Brennan Eagles inside the 15 went high and incomplete. A second-and-10 toss to Jake Smith was low and incomplete. On third-and-10, with 10 seconds left and staring at a 53-yard field goal attempt from there, Ehlinger lingered too long in the pocket and was sacked. A four-yard loss and a critical one, turning a 53-yard try into a 57-yard try with a breeze at his back.

Dicker, whose career-long is 57 yards, came up just left of the goal post. It was long enough, just not straight enough.

“My heart is broken for this senior class and everthing that they have worked for for four years,”  Texas coach Tom Herman said, his eyes red from a pre-press conference cry. “We didn’t do enough in this game to win it. Iowa State did just enough to do that. We will lick our wounds, wipe the tears out of our eyes and understand that this is not the last game. I know it feels that way.”

Texas managed just seven points in the final three quarters. The Horns showed up again on defense, stuffing the country’s top running back and stiffening inside the 20. But Texas had two golden chances to seal the win in the fourth quarter but came up empty on a pair of drives, including one that started at midfield thanks to a big kickoff return. A three-and-out on its second-to-last drive was particularly damaging; Iowa State put together its best drive of the day and took the lead on a short touchdown run. In a three-point loss, you can look at the little things: Settling for a short field goal instead of going for  it on fourth-and-short so close to the end zone on the opening drive of the game hurt; a questionable fake punt call will certainly be second-guessed; heck, even that third-down play call at the very end was a puzzler, as running it up the middle would have given Dicker some much needed extra yards on that 53-yard kick.

It wasn’t for wont of trying. The Cyclones looked primed to lose because of all those missed opportunities — specifically, squandered trips inside the red zone. We’re not talking dead zone, but settling for field goals instead of punching drives in for touchdowns could have been fatal in a tightly-played game. Hall struggled for most of the game until he peeled off a nice gain at the very end and then scored the game winner. Charlie Kolar, who had a touchdown catch against the Longhorns last year, came up big again with six catches for 131 yards, including a key 44-yarder in the third and a 17-yard catch on the winning drive.

See above. Any hopes of playing for the Big 12 championship hinged on knocking off the Cyclones. Texas is now all but out of the Big 12 race. How does spending the New Year’s holiday in San Antonio again feel? The Alamo Bowl probably awaits.

In order to get to the Big 12 title game, Texas has to beat Kansas State and Kansas, plus needs Oklahoma to lose one of its final two games: at home against Baylor on Dec. 5 or at West Virginia on Dec. 12.

So long, seniors: Friday was the final time we’ll see Sam Ehlinger, Ta’Quon Graham, Caden Sterns, Chris Jones and probably NFL draft-eligible juniors like Samuel Cosmi and Joseph Ossai playing at DKR. Ehlinger was 17-of-29 for 298 yards and a touchdown, and led the Horns with 65 rushing yards and another score. Cosmi had a hell of a moment blocking for that Ehlinger touchdown run. Sterns led the team in tackles, but had one critical missed tackle. Ossai had half a tackle for loss.

A tale of two running baks: The Horns opened the game featuring Bijan Robinson, making his fourth straight start. He finished with 54 yards on 16 carries. Hall, who was held to only 7 yards in the first quarter, finished with a respectable 91 yards and a touchdown on 20 carries, an average of 4.6 yards per.

Game balls: Offense — Another good game for Brennan Eagles, who led the Horns with five catches for 142 yards. He was targeted seven times. … Jordan Whittington had a key 13-yard catch to extend Texas’ final drive, for a first down. … Defense — Linebackers DeMarvion Overshown and Juwan Mitchell combined for 18 stops; Overshown added a tackle for loss and a pass breakup.