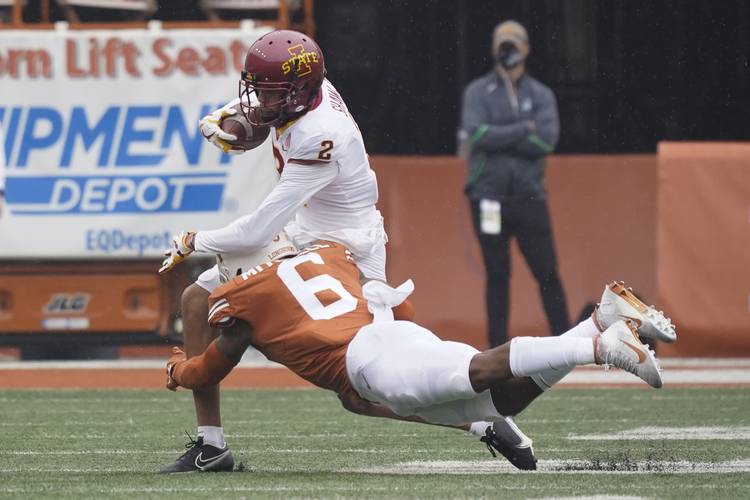 The good news: Despite the score, it just feels like Texas is in control. You can make the case that this should be at least a 20-10 lead, maybe even 24-10.

Cyclones kicker Connor Assalley missed a 41-yard field goal on the final play of the half that would have tied it.

The storylines and implications for this top-25 matchup are clear: It’s not just the final home game for players like Sam Ehlinger, Caden Sterns, Ta’Quon Graham, Chris Brown and probably Samuel Cosmi and Joseph Ossai, but it’s also a win-or-else day for Texas, which is battling Iowa State, Oklahoma and Oklahoma State for one of the two spots in the Big 12 championship game. If Texas wins today, and also beats Kansas State next Saturday and also Kansas on Dec. 12, then the Horns will get to Arlington. Lose today, and forget it.

We wondered whether the Horns would show any signs of rust, having not played in 20 days.

A combination of Ehlinger playing sharp, Bijan Robinson pacing the run game and a spirited effort from the defense, the Horns controlled the first quarter, stifled the nation’s leading rusher and have themselves in position to win this one and move on to Manhattan. Still, it’s only a one-possession game and Texas has squandered two scoring chances.

Quick start: For the second game in a row, the Longhorns came out moving chains and putting points on the board. Against West Virginia, it was Bijan Robinson’s 54-yard run on the first play of the game. Today it was Sam Ehlinger’s pretty, 59-yard touch completion to Brennan Eagles. The Horns led 13-7 after the first quarter and it could have been a bigger lead; Texas settled for a short field goal on a drive that stalled inside the 10 and had another potential scoring drive taken away by a turnover inside the red zone.

Robinson made his fourth straight start, and Texas opened the game with three straight runs. Ehlinger’s pretty, 59-yard touch completion to Brennan Eagles set up the first points of the game, a 21-yard chip shot field goal from Dicker the Kicker (not Dicker the Punter).

Getting his punts: Cameron Dicker is handling punting duties for the rest of the season. Ryan Bujcevski was lost with an ACL injury in the win over West Virginia two weeks ago. Dicker has punting experience, but not since high school. Dicker’s had only one punt so far, a 40-yarder in the second quarter that resulted in a fair catch.

Hall watch: Texas contained Oklahoma State’s Chuba Hubbard, who led the country in rushing last year, on Halloween (25 carries, 75 yards) and the Horns are making Breece Hall look mortal so far. The country’s leading rusher finished the first quarter with only 7 yards on three carries. He’s got 37 yards on 10 carries at the break.

Robinson has 11 carries for 42 yards for Texas.

QBs watch: First-half numbers are basically a quarterback draw — Ehlinger is 5-of-9 for 132 yards and 29 rushing yards, with a rushing score; Brock Purdy is 14-of-23 for 146 yards and a touchdown, with 19 rushing yards.

WVU’s top plays: Really, there was Shaw’s touchdown play down the Iowa State sideline in the first quarter, but not a lot else. There was the big hit on Tarik Black to force a fumble, and the Cyclones have one sack.

Horns up: LT Samuel Cosmi — a junior, but one that also may be playing his final home game — literally cleared the path for Ehlinger’s 17-yard touchdown run in the first quarter. Strong downfield blocking for the projected first-rounder. … Josh Thompson made an important stop on Iowa State’s first play of the game, stuffing Breece Hall for a 1-yard loss. That set the physical tone that the defense is giving. … Don’t forget: DeMarvion Overshown used to be a safety; he had a nice pass breakup on a third-down pass to All-American TD Charlie Kolar, forcing a punt in the first quarter. Overshown has had nine breakups in his last 14 games. … Chris Admiora’s open-field tackle on Purdy midway through the second quarter may have been a four-point play; the quarterback had a path to the end zone on a keeper had Adimora not made that play. Iowa State then threw incomplete on third down and had to kick a field goal.

Horns down: DT Jacoby Jones’ 15-yard penalty for shoving a Cyclones offensive lineman in the face extended Iowa State’s first scoring drive and moved the Cyclones into UT territory. … S Caden Sterns whiffed on a sideline tackle at the 7 on Sean Shaw’s 35-yard touchdown catch in the first quarter. Not a good play for the final career home game. … Speaking of final home games, Tarik Black’s 31-yard catch would have set the Horns up inside the 20 — but a big hit from an Iowa State safety forced a fumble. Opportunity lost.

Texcetera: Joshua Moore sighting. Ehlinger took a shot to UT’s leading receiver in the first quarter. It was incomplete, but Moore drew a pass interference call that moved Texas into Cyclones territory. He did make a catch in the second, his first reception since making the game-winner in overtime at Oklahoma State. … There were no significant injuries in the first half. Jones and Jalen Green both limped back to the sidelines at different points. … Texas unveiled its statue honoring Julius Whittier, UT’s first Black letterman, earlier today. And the 1970 national championship team also was honored today.

The Cyclones will get the ball to start the second half.