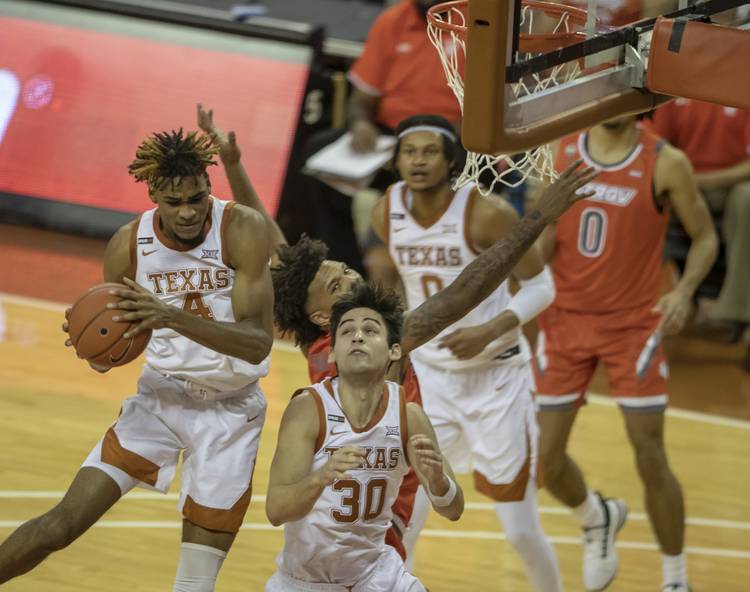 Texas freshman Greg Brown had a double-double in his UT debut at the Frank Erwin Center, Wednesday November 25, 2020. [RICARDO B. BRAZZIELL/AMERICAN-STATESMAN]

About the series: Davidson leads the all-time series 1-0. The two teams’ only meeting was in Charlotte on Dec. 28, 1968.

About the Longhorns: After fighting through butterflies in the opener, Brown will be looking for consistency. He was 2-for-9 shooting against UT-RGV but did have a thunderous dunk. It helps that Jones and Sims are veterans who can show him the ropes. These three games will unveil more about Smart’s rotation and how he wants to use various players. Players like Brock Cunningham and Royce Hamm Jr. will be expected to hustle and get rebounds even if they don’t score as much. On Saturday, freshman center Will Baker announced he was transferring. This came after Baker was one of only two players that did not play in the opener. Smart said G Kamaka Hepa plans on redshirting this season.

About the Wildcats: Davidson has a long history in Asheville, one that dates back to 1915. It’s the only team McKillop has ever coached, too. His 2008 team featured Stephen Curry and went all the way to the Elite Eight. The 70-year-old is among the most respected coaches in the game. This year’s team is off to a 1-0 start after getting past High Point in the season opener. Lee had a career-high 23 points and helped fuel a 10-0 run that put the game away. Grady was 9-for-20 shooting but went 2-for-9 from 3-point range. The Wildcats were plus-nine on the glass but gave up some easy shots in the second half. “There were some pretty good things we did resilience-wise,” McKillop said. Davidson was picked to finish seventh in the Atlantic 10 preseason poll while Grady was a first-team A-10 preseason pick as well.