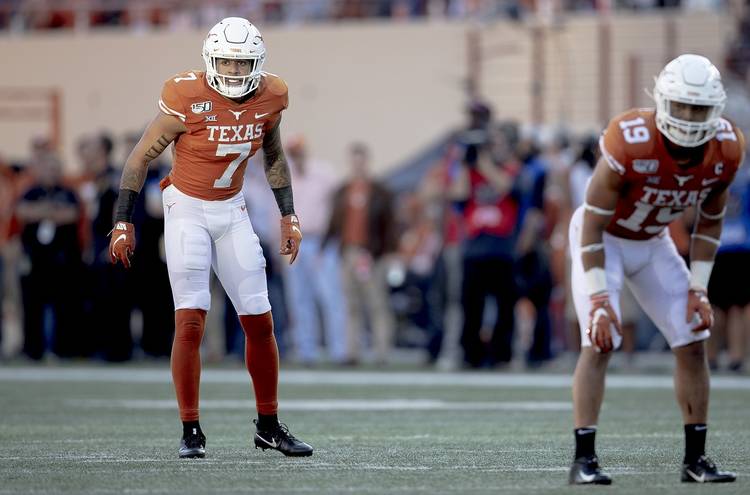 Texas defensive back Caden Sterns (7) waits for the snap against Kansas State on Nov. 9, 2019 in Austin. [NICK WAGNER/AMERICAN-STATESMAN]

For the second times in as many days, a longtime starter has revealed that he has played his last football game at Texas.

Junior safety Caden Sterns announced on Monday that he will opt out of the rest of UT’s season. Instead of travelling to Kansas State and Kansas, Sterns will turn his attention to the NFL Draft.

In September, Sterns told reporters that he decided to participate in this coronavirus-shortened season because he had “things to prove.” Sterns also stated his desire to win a Big 12 title, but Texas (5-3, 4-3 Big 12) has been essentially eliminated from championship contention even though two games remain on the schedule.

In a statement, Sterns said on Monday that “After much thought and prayer, I’ve arrived at the decision that it is time for me to follow my lifelong dream and declare for the 2021 NFL Draft. With that, I’ll be forgoing the remainder of my eligibility, but I’ll always look back at my time in Austin as some of the best years of my life, especially with my teammates who have become my brothers.”

On Sunday, offensive lineman Samuel Cosmi announced that he would sit out Texas’ remaining games and begin preparing for an NFL career. Most pundits have pegged Cosmi as either a first- or second-round pick. The 6-1, 207-pound Sterns, however, has seen his draft stock drop this year.

Sterns remains one of the highest-rated recruits ever signed by Tom Herman’s staff at Texas. A five-star talent in the 2018 recruiting cycle, Sterns made an immediate splash upon his arrival in Austin. His  freshman year included four interceptions, all-conference honors and semifinalist status for the Jim Thorpe Award. Sterns, though, missed five games due to injuries over his sophomore and junior seasons. Fifty-two tackles and a win-sealing interception against Texas Tech are among the highlights of Sterns’ 2020 campaign.

Cosmi and Sterns were two of the seven captains that the Longhorns voted on this season. Sterns was also a driving and vocal force for Texas’ athletes as they addressed racial issues on their campus this year.