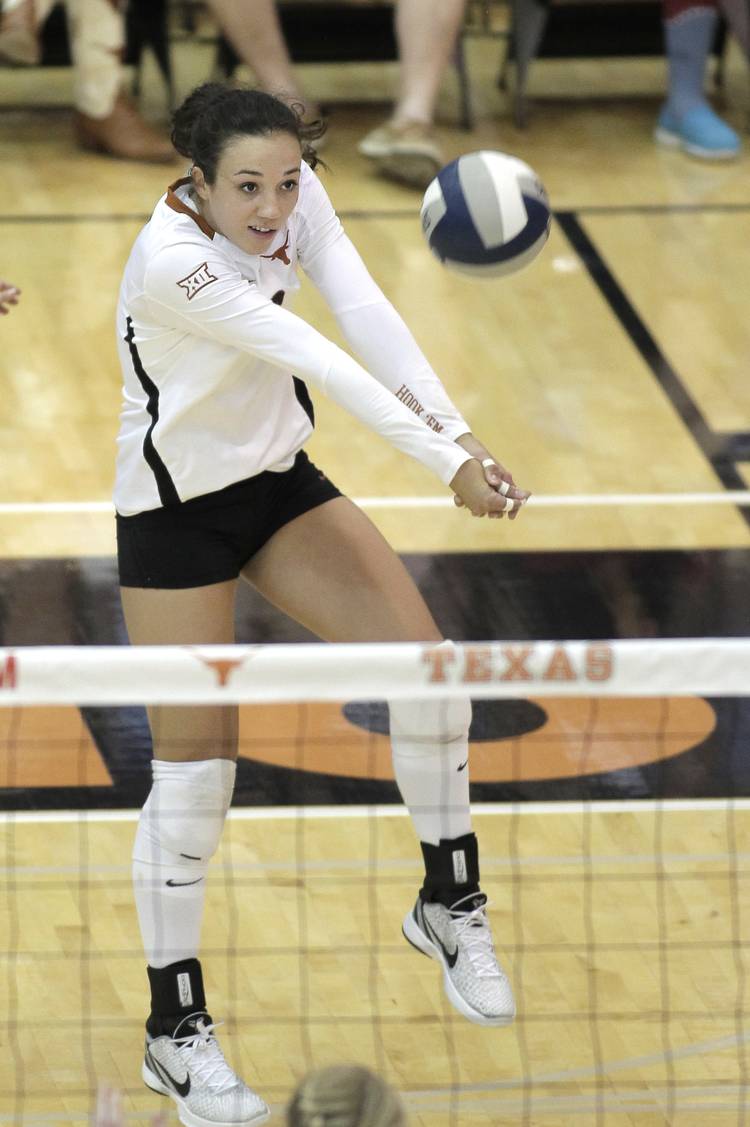 Amy Neal had 18 kills and seven digs in the Longhorns win over TCU in the Big 12 opener. (Photo by Erich Schlegel/Special Contributor)

The No. 2 Texas Longhorns defeated the TCU Horned Frogs 3-0 (25-19, 25-21, 29-27) to open Big 12 play on Wednesday night at Gregory Gym. Amy Neal led the Longhorns to their seventh win in a row, providing 18 kills and seven digs. Chiaka Ogbogu had 13 kills to go along with three blocks and two digs.

With the third set tied at 23, Ogbogu put the Longhorns (11-1, 1-0 Big 12) up by one before the Horned Frogs tied it on the next point. Neal came up big with a kill to get to match point, but TCU (11-4, 0-1 Big 12) kept fighting back and the set was eventually tied at 27. A service error once again gave Texas match point and Neal’s 18th kill of the night sealed the win for the Longhorns.

Paulina Prieto Cerame had nine kills on her way to a career-high kill percentage of .444.

Senior Molly McCage registered seven kills to go along with six total blocks. She surpassed Brandy Magee and Jane Winkel to move into third place in all time individual block assists by notching five in the match. She now has 399, just one shy of Khat Bell’s career mark and just 15 away from all-time leader Errica Hibben.

Texas has lost just three games in the span of seven matches dating back to their contest with UTSA on September 11. At one point in that span the Longhorns had won 12 games in a row.

Neal finished off the first set with a kill that was set up by Chloe Collins. Collins had 38 assists in the match to go along with her eight digs. Cat McCoy led the Longhorns with 18 digs.

A tight second set saw the Longhorns make a six-point run to help them take the win 25-21. A service error by Ashleigh Martin and a handling error by Regan McGuire ended the set in Texas’ favor.

The Longhorns continue Big 12 action as they head to Morgantown, W.V. to take on West Virginia on Friday at 5 p.m.