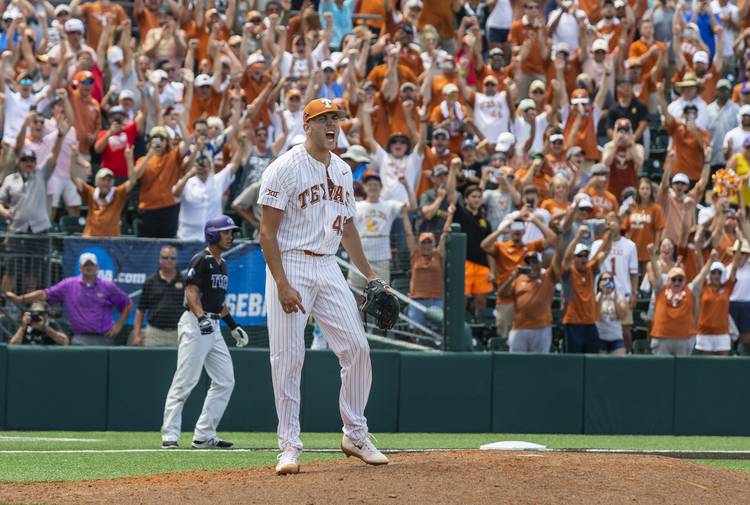 Texas' Nolan Kingham celebrates a final pitch of a 5-2 win over Tennessee Tech at UFCU Disch-Falk Field on June 11, 2018. (Stephen Spillman / for American-Statesman)

Three pitchers have decided that their last games at Texas were played in the College World Series.

Nolan Kingham, Andy McGuire and Parker Joe Robinson each revealed on Twitter on Thursday that they will not return to Texas in 2019. The three pitchers combined for a 12-7 record and 10 saves in 2018.

My time on the 40 Acres has come to an end but I’ll never forget it.

Playing at Texas has always been a dream of mine and I just wanted to thank my coaches, my teammates, and the fans for making this the best three years of my life!

Earlier this month, Kingham was selected by Atlanta in the 12th round of the MLB Draft. A 6-3 right-hander from Las Vegas, Kingham was the Friday starter for the Longhorns during the 2017 and 2018 seasons. Kingham also picked up three saves this year, one of which secured a trip to the College World Series.

If you’d have told me last year that I’d represent Texas in the 2018 @NCAACWS, I don’t know if I’d have believed you.

To my family, my teammates, my coaches, the @BlueJays thank you. Time to get to work🇨🇦

McGuire was not on Texas’ roster the past two seasons, but he developed into a closer and part-time outfielder in 2018. The Blue Jays, though, were one of the few teams that expressed interest in him as an infielder. Toronto used a 28th-round pick on McGuire.

Thank you for the past 4 years @TexasBaseball I’m going to miss the photo shoots that gave me quality pictures like this the most #HookEmForever pic.twitter.com/Y73gzQDReA

Robinson was not drafted but he did graduate this May with a degree in sport management. Robinson, a right-hander who changed his throwing motion after David Pierce’s hire ahead of the 2017 season, led UT with his 1.71 ERA in 2018. He made 22 relief appearances for the Longhorns this spring.

As juniors, the three pitchers still had a year of eligibility left. The departures of Kingham, McGuire and Robinson, however, were not surprises. Fellow juniors and draftees Kody Clemens, Chase Shugart and Josh Sawyer have yet to announce their future plans but they also aren’t expected back in 2019.