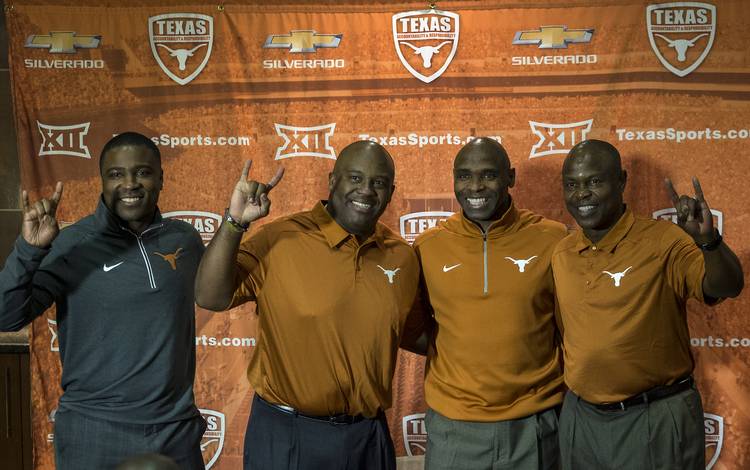 In today’s Golden’s Nuggets, Cedric touches on some Bevo-related items including Charlie Strong’s new hires and what it means for the 2016 season. Here’s what he had to say on UT:

“Now that Strong has put together his coaching staff, he has to understand that this will be his last opportunity to overhaul the men in his room.

Advertisement
This is Strong’s sink-or-swim staff, and 2016 is his sink-or-swim season. If he doesn’t win with Vance Bedford, Sterlin Gilbert, Brick Haley, Brian Jean-Mary, Matt Mattox, Jeff Traylor, strength and conditioning coach Pat Moorer and the aforementioned new trio — and when I say win, I’m talking about a minimum of eight victories — then he won’t be around for year No. 5, possibly not even for year No. 4.

After a while, the time comes when wholesale changes aren’t enough. Strong knows as much. To his credit, he has assembled a talented staff. Question is, will it win enough games to keep him in Austin for the long haul?

Remains to be seen.”

On Strong not being able to catch a break with a possible deposition:

“Charlie Strong introduced his three newest coaches to his coaching staff on Monday but didn’t address the woolly mammoth in the room.

As stories circulate about the nature of his relationship with a woman in Louisville who is going through a hotly contested divorce, Strong took the mic as the face of Texas football Monday afternoon, giving his thoughts on Clay Jennings, Anthony Johnson and Charlie Williams, but not addressing that he has been subpoenaed by a lawyer in Kentucky and may be deposed.

He had this it’s-business-as-usual demeanor about him, and maybe that’s how they’re approaching this situation over at Bellmont. With that said, this case isn’t going away any time soon.

It just seems that Strong can never completely untangle himself from distractions, whether it’s players in legal trouble, an offensive line coach facing a lawsuit or this current case, which has him in a spotlight far different than any he’d be seeking as the head coach at the University of Texas.”

For the rest of Ced’s nuggets, including his thoughts on Barry Bonds and the Cowboys’ treatment of Randy Gregory and Greg Hardy, click here.