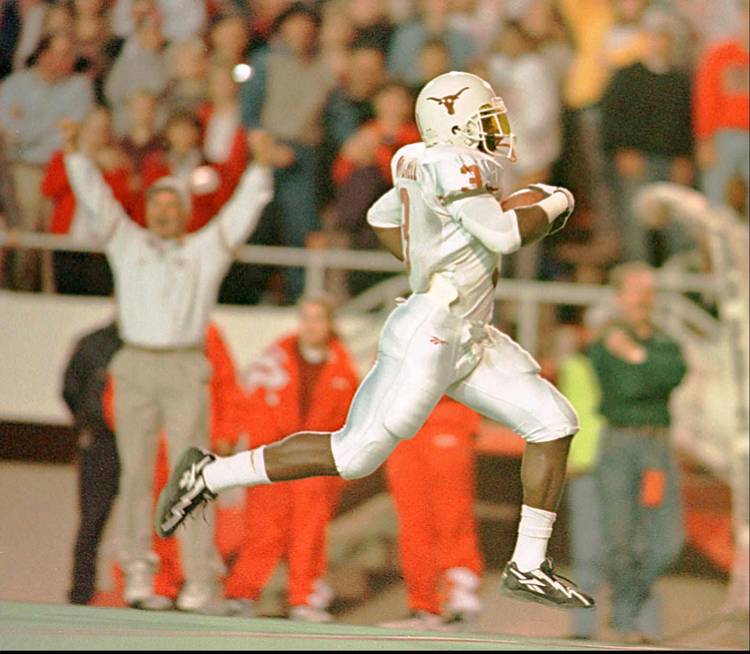 Texas' RB Shon Mitchell runs a sprint to the endzone on Texas' first possession to score a TD against Texas Tech in 1996. (Ralph Barrera/American-Statesman)

When Texas introduced new running back coach Anthony Johnson, he talked about the history of Texas running backs. He pointed out that the two Heisman Trophy winners were running backs.

He’s right, of course.  And this year Texas may have the best running back corps in a while. Chris Warren III, Kirk Johnson and D’Onta Foreman are in spring camp and Kyle Porter will join them this summer.

That’s a good group. But what are the best running back combos in Texas football history? Glad you asked. Using our Kirk Bohls method (looking only from 1972 to now), here are five running back pairings or groups to remember.

Pair Earl Campbell with any running back he played with, and it’s probably a winning combination.

Campbell and Leaks in 1974 led Texas to an 8-4 record. Freshman Earl Campbell had 928 yards rushing and six touchdowns. Leaks had 409 yards and four touchdowns while Wyatt had 590 and eight rushing touchdowns. Quarterback Marty Akins also had 659 yards and 10 touchdowns (the team lead).

But his best year was 1977. Campbell rushed for a nation-leading 1,744 yards and 18 touchdowns en route to the Heisman Trophy. His running mate that year was Ham Jones, who scored six touchdowns and went for 489 yards.

Metcalf and Norris were teammates for four seasons at Texas, but their junior years were the best seasons they had. Metcalf ran for 1,161 yards and 10 touchdowns, while Norris gained 635 and three scores. Both averaged more than five yards per carry.

Since 1972, the 1995 year is likely the best running back tandem (not collection, see 2005). Williams, we all know him, rushed for 990 yards and eight touchdowns as a freshman. Mitchell led the team in rushing with 1,099 yards and 10 touchdowns. The only time Texas has been closer to having two running backs rush for more than 1,000 yards was in 2013, when Malcolm Brown rushed for 904 and Johnathan Gray 780.

Williams and Mitchell combined for 2,356 yards from scrimmage and 18 touchdowns. Both averaged more than six yards per carry.

The next year, 1996, Williams rushed for 1,272 yards and Mitchell 626. Both averaged more than five yards per carry (Williams toted 6.2 yards per carry) and Williams scored 12 touchdowns and Mitchell four. But they were joined by Priest Holmes –  he missed 1995 with a knee injury – who scored 13 touchdowns on just 59 carries in 1996 with 324 yards.

Williams, Holmes and Mitchell combined for 32 touchdowns from scrimmage for Texas, which somehow went 8-5 that year.

Taylor rushed for 284 yards on 28 carries for a 10 yard per-carry average. Matthews only had 161 yards rushing and Selvin Young only 102.

Vince Young rushed for 1,079 yards and 14 touchdowns as well. Yes, he wasn’t a running back. But his rushing numbers and Benson’s add up to 2,913 yards and 33 touchdowns.

The very next year, Texas’ running game was never better and was still killing teams on the ground. Charles and Melton were both freshmen and Charles gained 878 yards, while Melton went for 432. Taylor rushed for 513 yards. Selvin Young added 461 yards, while quarterback Vince Young led the team with 1,050 yards.

Charles, Melton, Taylor and Selvin Young combined to run for 31 touchdowns. That’s not counting the 12 scored by Vince Young on the ground. Texas had four players average more than five yard per carry that season.

Other years to mention

Like we said earlier, Brown and Gray’s 2013 season was productive, but neither averaged more than five yards per carry and Brown led the team with nine touchdowns.